Update Required To play the media you will need to either update your browser to a recent version or update your Flash plugin.
By Susan Shand
11 July 2021


In a 1970 Beetle Bailey comic strip, a character known as Sarge shouts at his uniform-wearing dog, Otto, over a paperwork mistake. 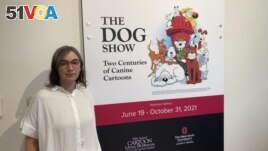 "We can't all be Snoopy," a sad Otto answers.

This joining of two well-known comic strip dogs is being shown along with many other images at the world's largest cartoon museum. It is part of a new presentation of the history of dogs in the world of cartooning.

"The Dog Show: Two Centuries of Canine Cartoons" is being shown at Ohio State University's Billy Ireland Cartoon Library & Museum in Columbus, Ohio. It will be open through October.

The idea for the show came when the family of Brad Anderson, the creator of the cartoon dog Marmaduke, donated his collection in 2018. It included 16,000 Marmaduke cartoons from 1954 to 2010 and other works. Anderson died in 2015.

The addition of Anderson's dog cartoons started a discussion about other cartoons with dogs in the museum, said museum coordinator Anne Drozd.

"There were so many comic strips and magazine cartoons and comic books, and so many different examples that have dogs in them."

Dogs "aim to please, so they actually make really good cartoon characters," said Walker. He is a cartoonist and cartoon historian. He is also the son of Mort Walker, the creator of Beetle Bailey.

Though Otto first appeared in Beetle Bailey in 1956, he was a normal, four-legged dog until around 1970 when Mort Walker made him more human. He gave Otto his own uniform and desk. That change most likely came because of Snoopy in Charles Schulz' Peanuts strip, Brian Walker said.

The oldest image in the show is a reprint of British artist George Cruikshank's drawing of weather so bad it's "raining cats and dogs."

Moving through the years, the show includes well-known dogs like "Sandy" from Little Orphan Annie, "Daisy" from Blondie and "Dogbert" from Scott Adams' Dilbert strip.

George Booth's New Yorker magazine cartoon dogs are also being shown. And so are images by newspaper cartoonist Lynda Barry. Other works include Shary Flenniken's "Trots and Bonnie," about a girl and her talking dog that appeared in "National Lampoon" from 1972 to 1990.

There are well-known characters like "Dog Man" from the book series by cartoonist Dave Pilkey. There are also six strips from a 1940s Dick Tracy cartoon with a dog named Mugg that the detective looks after for a while.

Brian Walker said his favorite cartoon in the show comes from the 1955 Disney movie "Lady and the Tramp," showing the dogs eating at an Italian restaurant.

"They're both eating the same piece of spaghetti and their lips kind of come together and they fall in love," Walker said. "It doesn't get much better than that."

comic strip – n. a series of cartoon drawings that tell a story or part of a story

character –n. a person or animal who appears in a story, book, TV show, movie or similar form of art

cartoon – n. a series of drawings that tell a story and regularly appear in newspapers or magazines

museum –n. a building in which interesting or valuable things are collected and shown to the public

personality –n. the set of qualities and ways of behaving that make a person different from others

spaghetti – n. a long stingy food known as pasta which is made from flour