Update Required To play the media you will need to either update your browser to a recent version or update your Flash plugin.
By John Russell
20 May 2022


The music group Coldplay plans to use their fans' energy to help provide power for their musical performances and to help the environment.

The band has promised to use methods that are sustainable. This includes using energy that does not add carbon gases to the atmosphere. The band hopes to cut the amount of carbon dioxide, or CO2, released by its business activities by 50 percent.

The music stars have added special dance floors and energy-storing exercise bicycles to their latest world tour. The goal is to get fans to help power the show as they dance or spin by producing electricity. 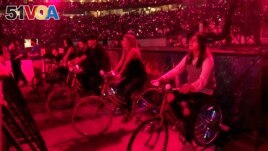 Concertgoers ride stationary bikes during Coldplay's Music of the Spheres world tour on Thursday, May 12, 2022, at State Farm Stadium in Glendale, Ariz. (Photo by Rick Scuteri/Invision/AP)

Bassist Guy Berryman suggested music fans will be more likely to accept changes to the concert experience if it is "a kind of opportunity to do something fun."

Each special dance floor, called a kinetic dance floor, can support many people. The floor creates electricity when people move on it. The band even has competitions before its performances to find out which group of fans can create the most power.

Each of the bikes can create an average of 200 watts of energy, captured in batteries that run parts of the show.

Coldplay is just one music act working to reduce the effects of its tour on the Earth's climate.

Other famous musicians and bands are also taking such steps, including Billie Eilish, Harry Styles, The Lumineers, Dave Matthews Band, Shawn Mendes, Maroon 5, John Mayer, Lorde, The Chicks, and The 1975.

The music artists are part of an effort by the entertainment industry — from sports teams to toy manufacturers — to reduce carbon gas emissions.

Adam Gardner is with Reverb, a nonprofit group that helps bands make their concerts better for the environment. He is not involved with Coldplay's tour.

But Gardner said, "The relationship that musicians have with millions of their fans is unlike any other relationship of any other public figure. It can be a walking, talking example."

Musicians are providing more plant-based food choices. They are not using single-use plastic containers. And they are trying to change the transportation they and their fans use.

Eilish has promised to eliminate an estimated 35,000 single-use water bottles from her tour. She also only serves vegetarian food, or food without meat, backstage. The band Massive Attack is traveling by train.

‘It makes us feel part of a community'

Coldplay has taken other steps to reduce the environmental effects of its tour.

The "Music of the Spheres" tour stage uses recycled steel. The band hopes to deploy the world's first tour battery system, made from 40 repurposed BMW electric car batteries. The hope is to power the entire show with batteries.

"We are very blessed that we have the resources to be able to do it because it's very expensive to try these things for the first time," said Martin. "We're so privileged that we're in a position where we can change."

Martin suggested that all of these changes are meant to bring a sense of belonging to music fans.

"Everything in our show is really designed to bring everyone into the same group, singing together and wearing the wristbands. And this is just an extension of that. It makes us feel alive. It makes us feel part of a community," he said.

Mark Kennedy reported on this story for the Associated Press. John Russell adapted it for VOA Learning English.

sustainable—adj. involving methods that do not completely use up or destroy natural resources

backstage –n. behind the stage of a theater

privileged—adj. having special rights or advantages that most people do not have

wristband –n. a thin piece of material that is worn on the arm near the hand

extension –n. something (such as an interest or activity) that develops from something else — + of