Update Required To play the media you will need to either update your browser to a recent version or update your Flash plugin.
By John Russell
03 December 2021


A conductor in Mexico hopes to gain listeners through a new work in which a clown performs with musicians.

Alondra de la Parra has led more than 100 large music groups, called orchestras. They include the London Philharmonic and the Orchestre de Paris. 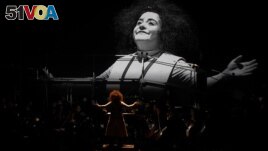 Clown performer Gabriela Munoz stands in front of the GIO Symphonia orchestra during a preview of "The Silence of Sound" in Girona, Spain on November 25, 2021, in this handout photo obtained by Reuters on December 01, 2021.

The new performance, "The Silence of Sound", puts musicians on stage rather than below the stage in an area known as the pit.

Through classical music, the orchestra plays an important part in the story as the clown searches for meaning and happiness.

"The stories we tell in this show are just some out of the many possible stories one can come up with when listening to classical music," de la Parra told the Reuters news agency.

Formal music of Western culture is often described as "classical."

She added, "We hope to reach a larger audience so that they fall in love with the orchestra, and also to give some comfort, dreams, imagination and art in this difficult period of time that we are living in."

Mexican clown performer Gabriela Munoz performs with the musicians. She does not speak during the performance. Instead, she acts with images, such as birds in flight.

She added that the clown goes on a trip, or journey, to "find her inner music that allows her to dance to her own rhythm."

She said she wanted to have different kinds of works, "one after the other, that could be a very beautiful sample as an introduction to the orchestra of pieces that anybody can fall in love with immediately."

The two women have been working together on the project for six years, recently facing issues created by the COVID-19 pandemic.

"The time we're living and going through this pandemic makes it even more relevant...to remind (ourselves) how important it is to go through emotional journeys, to continue sharing," Munoz said.

"The Silence of Sound" will have its first performance in Mexico in July. De la Parra also plans performances in other parts of Mexico and in Europe.

Marie-louise Gumuchian reported on this story for Reuters. John Russell adapted it for Learning English. Mario Ritter, Jr. was the editor.

clown – n. someone who performs in a circus, who wears funny clothes and makeup, and who tries to make people laugh

stage –n. a raised structure in a theater or similar place where the performers stand

comfort –n. a state of feeling less worried or upset after a time of trouble or pain

rhythm –n. a regular, repeated pattern of sounds or movements