Update Required To play the media you will need to either update your browser to a recent version or update your Flash plugin.
By Ashley Thompson
08 April 2022


Famous music artists are returning to Venezuela to perform after several years of avoiding the country. The shows, however, come at an extremely high cost, even for middle-income Venezuelans.

Ticket prices for international stars go from about $55 to as high as $600. Last month, Mexican music star Alejandro Fernandez performed before thousands of cheering fans at a theater in Caracas. Some of the fans had gotten bank loans to pay for their tickets.

Such major performances in the capital were relatively common in the past. Superstars like the Backstreet Boys were so popular that Venezuelans would wait in line, even overnight, to get tickets. Shakira, Guns N' Roses and Juanes are among others that used to perform in the country. 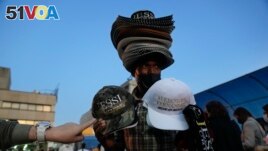 A man sells hats with the name of Mexican singer Alejandro Fernandez and Colombian singer Jessi Uribe as people line up to get into the concert in Caracas, Venezuela, March 3, 2022. (AP Photo/Ariana Cubillos, File)

But in 2010, visits by major performers began to slow. Venezuela was entering an economic and political crisis that would continue for years.

Today, about 75 percent of Venezuela's population still lives on less than $2 a day. But for those who have found good private-industry jobs, entered the gig economy or have a business, things are improving.

The country no longer restricts transactions in U.S. dollars. The value of the bolivar, Venezuela's money, had dropped greatly as a result of inflation.

The change in monetary rules signals to show organizers that more Venezuelans will be free to buy tickets. People can go to big shows in the country once again.

"They're going to book cities and venues based on venues they could sell," said Jeffrey Dorenfeld. He is a music industry professor at Berklee College of Music in Boston, Massachusetts. "Artists are not going to want to play to half houses. They don't like to see empty chairs. The objective is to fill the room with paid attendance," Dorenfeld added.

Caracas businessman Edgar Villanueva attended the Alejandro Fernandez show along with his wife, two daughters and a son-in-law. One of his daughters had learned of the concert on Instagram and immediately bought the tickets.

As he waited to enter the theater, Villanueva said he recognized his country's problems. But he added that he is not a politician and just wanted to have a good time with his family. They were hoping Fernandez would sing A Qué Sabe El Olvido. Or, in English, What is The Taste of Being Forgotten.

"We have always been fans of Alejandro. We are passionate about his songs," he said.

Mileydi Villamizar used to go to concerts often before the crisis. She was happy to go see Alejandro's show after years of absence.

Villamizar paid around $75 for her ticket. She hopes to see the Backstreet Boys return to Venezuela one day. Mexican rock band Mana is also on her list.

Still, attendance for her is very costly.

"There is a part of the population that can still afford it," she said. "And there is another that, like us, has had to scrape together and even get a loan."

ticket - n. a piece of paper that allows you to see a show, participate in an event, travel on a vehicle, etc.

transaction - n. a business deal : an occurrence in which goods, services, or money are passed from one person, account, etc., to another