Update Required To play the media you will need to either update your browser to a recent version or update your Flash plugin.
By Bruce Alpert
07 October, 2016


Enjoying a musical performance no longer requires a costly ticket or a trip to a theater. These days, musicians are performing in private homes, at hair cutting shops, at airports...even on ferry boats.

Musicians like house concerts. At music clubs, they often have to perform over loud conversation or deal with people who have had too much alcohol. People at house concerts are more focused on listening to the music.

Just a few hours before the Bombadils started singing at the O'Hair Salon, Lindsay was cutting hair and Tamera was doing facials.

Then, they moved chairs and microphones to create a small performance space. The Bombadils made music in the front part of the hair salon, near the hair dryers and make-up table.

"This is our first show at a hair salon," Sarah Frank of the Bombadils told concertgoers at last week's performance. Frank said she and band members Luke Fraser and Kaitlyn Raitz had a great time "interacting" with the audience.

"Maybe one day we will play bigger venues," Frank said. "If that is the case we hope our experience playing in small venues will help us remember the real reason we are playing music."

Concerts in people's homes, or small businesses such as O'Hair's, are becoming more popular, musicians say.

"There is a more relaxed atmosphere," said Domenic Cicala, a musician who opened up his O'Hair Salon to concerts. "People really get to know the artists."

Kat Parsons is a Maryland-based singer songwriter who enjoys performing at house concerts.

"House concerts have an intimacy that is so rewarding as a performer," Parsons said. She said performers can take their time, tell stories and talk with concertgoers. 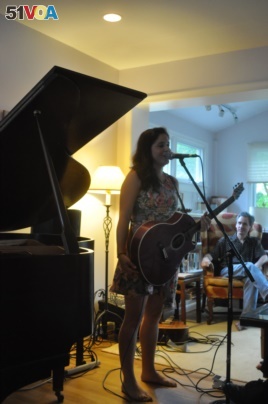 For Parsons, that usually means lots of laughing. She explains that one of her songs, "Talk to Me," is based on an ex-boyfriend who was unwilling to say what he was really thinking.

Being a singer-songwriter is a great way to have the last word on a failed relationship, she joked.

At house concerts, people get time before and after concerts to meet the performers. Often, the hosts or guests will provide food and drink. 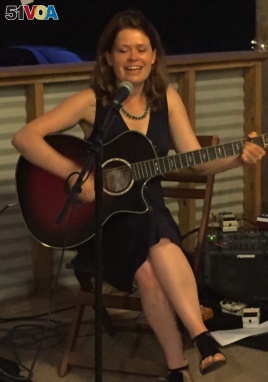 At music clubs, the owners take a share of money made from ticket sales, Schrader said. But all the money goes the performer when people pay to attend a house concert.

"At a house concert, the host is usually doing it for the love of the music."

Often, the crowd, will pass a container to fill with donations. Schrader said the performers get the full amount.

Matt Hart and Aubrey Zoli make up Local Strangers, a folk-rock group based in Seattle, Washington.

The duo often performs at house concerts. But they also have performed at more unusual places. For example, they sang for travelers at Seattle-Tacoma International Airport. They also made music on a former ferry now used for boat tours of the city's lakes. 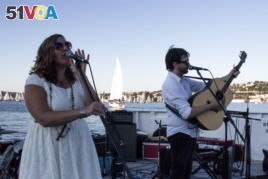 The Local Strangers Perform on a Boat

Hart said their voices "echoed" as they floated under bridges.

Hart loves house concerts. He describes it as "showing up at a party and not knowing most of the people."

"People really like listening to music in the living room of a friend," Hart said. At many such concerts, the duo does not need microphones. Yet, every word of their songs can be heard.

People at house parties often are more likely to buy music and other products from performers because the audience can get to know the artists.

That extra money is important for musicians, most of whom struggle to make a living.

We want to hear from you. Write to us in the Comments Section and share your views on 51VOA.COM. Do you use any words that have a different meaning to you than what the dictionary says?

venue – n. the place where an event is held

microphone -- n. a device into which people speak or sing in order to make them sound louder

relaxed -- adj. calm and free from stress, worry, or anxiety

rewarding -- adj. giving you a good feeling that you have done something valuable or important

tour -- v. to travel around places to perform

ferry -- n. a boat that is used to carry people and things for a short distance between two places

echo -- v. a sound that is a copy of another sound and that is produced when sound waves bounce off a surface