Update Required To play the media you will need to either update your browser to a recent version or update your Flash plugin.
By Hai Do
28 October 2022


Elon Musk has taken ownership of Twitter. Musk immediately removed the company's top leaders. But no one knows exactly what the billionaire businessman will do with the social media service.

"The bird is freed," Musk wrote on Twitter after he completed his $44 billion takeover of the company on Thursday. He was making note of Twitter's logo, which is a small blue bird.

The closing of the deal ended months of uncertainty surrounding the influential service. 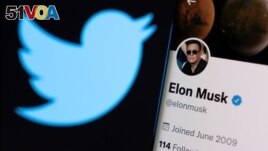 In April, Musk offered to buy Twitter for $44 billion. Musk said at the time that his goal was to shape the service into a place for free speech. Three months later, he withdrew his offer saying Twitter did not provide him with enough information about the number of false, or fake, accounts.

Musk has left Twitter employees, investors and the public wondering what he will do with the service. On Thursday night, Musk wrote an extended comment about the deal.

Musk wrote: "The reason I acquired Twitter is because it is important to the future of civilization to have a common digital town square, where a wide range of beliefs can be debated in a healthy manner, without resorting to violence."

Musk, the world's richest man, said he did not buy Twitter to make more money. He said that Twitter "cannot become a free-for-all hellscape." He also said it would become "the most respected advertising platform in the world."

Yet Musk has not offered details on how he will reach his goals for the company. He also has not said who will run the company.

Pinar Yildirim teaches marketing at the University of Pennsylvania's business school. She said Musk's latest comment is a change from his earlier position that Twitter unfairly restricted free speech. She noted that it is an understanding that having no content moderation is bad for business. It also puts Twitter at risk of losing advertisers and users.

Yildirim told the Associated Press, "You do not want a place where consumers just simply are bombarded with things they do not want to hear about, and the platform takes no responsibility."

In May, Musk said he would end Twitter's ban on the account of former president Donald Trump. The account was removed after the January 6 attack on the U.S. Capitol. Trump said at the time that he would not return to the service and has since launched his own social media service, Truth Social.

As concerns rise about the direction of Twitter's content moderation, European Union Internal Market Commissioner Thierry Breton tweeted to Musk on Friday that "In Europe, the bird will fly by our rules."

Under EU rules, technology companies like Twitter could face severe financial penalties if they do not control illegal or harmful content, including hate speech and disinformation.

Twitter is struggling to reach users as compared to other social media services. Major Twitter users make up 10 percent of the service, but they create 90 percent of all tweets.

Hai Do adapted this story for Learning English with reporting from Reuters and The Associated Press.

logo - n. a symbol that is used to identify a company

uncertainty - n. something that is doubtful or unknown

acquire - v. to come to own something

range - n. a series of things in a line

manner - n. a way of acting or proceeding

resort - v. to do something because no other choices are possible

platform - n. a place to tell large number of people about an idea or product

bombard - v. to constantly or repeatedly send something

penalty - n. punishment for a crime or offense