Update Required To play the media you will need to either update your browser to a recent version or update your Flash plugin.
By Hai Do
06 June 2022


Several Muslim-majority countries have protested comments made by top officials of India's governing party. They accused the party officials of making insulting statements about Islam and the Prophet Muhammad.

On social media, some Muslims have called for a boycott of Indian goods. And in parts of India, it has also led to protests against Modi's ruling party. 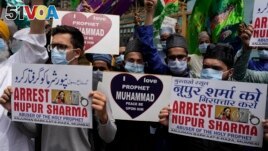 Over the years, Indian Muslims have often been targeted for things such as their food, clothing and inter-religious marriages. Rights groups such as Human Rights Watch and Amnesty International have warned that attacks against Indian Muslims could increase.

Modi's party denies the accusations, but India's Muslims say attacks against them and their religion have increased sharply.

The anger has been growing since last week, after the two BJP officials made comments that were seen as insulting Islam's Prophet Muhammad and his wife Aisha.

Modi's party took no action against the officials until Sunday. That is when several Arab nations, starting with Qatar and Kuwait, called their Indian ambassadors to protest. Saudi Arabia and Iran also added their voices to the protest.

The BJP suspended the officials and said it "strongly denounces insult of any religious personalities." India's embassies in Qatar and Kuwait released a statement saying the views expressed about the Prophet Muhammad and Islam were not those of the Indian government and were made by "fringe elements."

Qatar's Foreign Ministry, however, said it expected a public apology from the Indian government. And Kuwait warned that if the comments go unpunished, India would see "an increase of extremism and hatred."

The Grand Mufti of Oman called the action of Modi's party toward Islam a form of "war." And Egypt's Al-Azhar Mosque, the Sunni world's top center of religious learning, described the remarks as "real terrorism (that) can plunge the entire world into severe crises and deadly wars."

Modi's party also faced anger from some of its own supporters, but it was for a different reason. Many Hindu nationalists wrote on social media that the government was giving in to international pressure.

The Organization of Islamic Cooperation (OIC) said in a statement: "These insults come in the context of the increasing intensity in hatred and insults to Islam in India and the systematic harassment of Muslims."

The 57-member organization noted bans on head coverings in classrooms in some Indian states and the destruction of Muslim property as examples of the Indian government's unfair treatment of Muslims.

More recently, religious tensions increased after Hindus went to court in northern Varanasi city to seek permission to pray at a 17th-century Muslim religious center. They argued that the mosque was built on the ruins of an old Hindu temple.

Hai Do adpated this story for Learning English based on Associated Press and Reuters news reports.

prophet - n. a member of some religions who delivers messages that are believed to have come from God.

context - n. the situation in which something happens

harassment - n. act of repeatedly attack or bother (someone)