Update Required To play the media you will need to either update your browser to a recent version or update your Flash plugin.
By Bryan Lynn
22 March 2022


Some Muslim students in southern India have chosen to stay away from school rather than obey a ban on hijabs.

The hijab ban began in January at a government-run junior college in the city of Udupi, in Karnataka province. The junior college is similar to a high school in the United States.

Some students protested the ban by staying outside and attempted to hold classes there. They argued that Muslim students had long been permitted to wear hijabs at school. 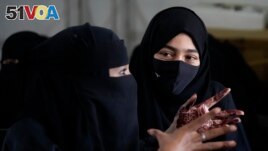 More schools in the state soon ordered similar bans. This led to demonstrations by hundreds of Muslim women and counter protests held by Hindu students.

The hijab head covering is worn by many Muslim women to show modesty or as a sign of their religious belief. Opponents consider it a sign of oppression that is forced upon women. That idea is rejected by hijab supporters. They say it has different meanings for different people, including as an expression of Muslim identity.

Six students brought a legal case to have the bans overturned, arguing that they violated their rights to education and religious freedom. But on March 15, an Indian court upheld the ban. In its ruling, the court said it did not consider the hijab a necessary practice of Islam.

The issue has started new debates over the rights of Muslims in India. Muslims make up 14 percent of the country's 1.4 billion people. Muslim groups have accused the government of pushing them aside as a minority in the population. They see restrictions on hijabs as a worrying sign of Hindu nationalism under Prime Minister Narendra Modi. Modi's Bharatiya Janata Party rules the state of Karnataka.

Aliya Assadi is a student in the state. When she was 12, she wore a hijab while representing the state at a karate competition. She won gold at the event. But when she recently tried to wear the head covering to her junior college, she was blocked from entering.

"It's not just a piece of cloth," Assadi told The Associated Press (AP). "Hijab is my identity. And right now what they're doing is taking away my identity from me," she said.

To reduce tensions in the state, officials closed schools and colleges for three days. They then ordered a statewide ban on the hijab in classes. The state's order said, "religious clothing" in government-run schools "disturbs equality, integrity and public law and order."

Some students gave in and attended with their heads uncovered. Others refused and have been barred from school for nearly two months.

One of those students is 18-year-old Ayesha Anwar, from Udupi. She said she has missed tests and is falling behind in her schoolwork. "I feel like we are being let down by everyone," Anwar told the AP.

Ayesha Imtiaz, another student barred from school, said she wears the hijab as a sign of devotion to Islam. But the 20-year-old noted that opinions differ on the issue even among Muslim women.

modesty – n. the quality of not being too proud of your own skills and successes

practice – n. what people do or how they do it

disturb – v. to worry or cause to be upset

integrity – n. honesty and the ability to do or know what is morally right

devotion – n. great love or loyalty for someone or something

empower – v. to give someone the confidence, skills, freedom, etc. to do something