Update Required To play the media you will need to either update your browser to a recent version or update your Flash plugin.
By Mario Ritter
01 February, 2016


New members of Myanmar's legislature, many dressed in traditional clothing, took a joint oath of office Monday in the capital, Naypyidaw.

The new legislature, or parliament, is being called the country's first democratically elected government in more than 50 years.

European Union ambassador Roland Cobia observed the ceremony. He said, "This is the first really concrete institutional transition of what the elections have produced and the expression of the will of the people."

The National League for Democracy won 80 percent of the available seats in both houses of the parliament. The NLD is the party of democracy activist and Nobel Peace Prize winner Aung San Suu Kyi. 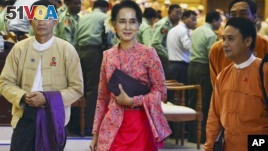 Myanmar opposition leader Aung San Suu Kyi, center, walks along with other lawmakers of her National League for Democracy party as they leave after a regular session of the lower house of parliament, Feb 1, 2016 in Naypyitaw, Myanmar.

However, it remains unclear who will replace retired general Thein Sein as president. Aung San Suu Kyi is very popular. But she is barred by the constitution from becoming president.

Myanmar's military remains politically powerful. It automatically holds one-fourth of the seats in both houses of parliament.

Observers say Aung San Suu Kyi is talking with the military to suspend the clause in the constitution that prevents her from being president.

NLD officials contacted by VOA have not confirmed that talks are under way with military leaders.

The clause states that a presidential candidate must be a citizen, be born of parents who are both Myanmar citizens, and cannot have a foreign spouse or children. It effectively bars Aung San Suu Kyi whose two sons are British citizens.

The NLD leader has said she will be "above the presidency." But she has not said whom she prefers to take the office.

This month, the parliament will likely choose the president from three vice-presidential nominees. They will be selected by the elected lower house of representatives, the elected upper house and the appointed army representatives.

No dates have been announced for the parliamentary procedures.

President Thein Sein and the military have promised a smooth transition of power.

The country's military has governed directly or indirectly since 1962 when it seized power after years of instability under civilian rule.

NLD won a major victory last November 8th. It was 25 years after the party won a national election only to see the results cancelled by the military.

The military-supported Union Solidarity and Development Party won an election in 2010. However, the NLD boycotted that election.

This story is based on reports from VOA's Steve Herman and Richard Green. Mario Ritter adapted the story for Learning English. Kathleen Struck was the editor.

What do you think of the transition taking place in Myanmar, also known as Burma? Let us know in the comment section below and on 51VOA.COM.

transition – n. a change from one state to another

automatically – adv. happening because of a rule, law or past agreement

speculation – n. ideas about something that is not known

clause – n. a separate part of a legal document