Update Required To play the media you will need to either update your browser to a recent version or update your Flash plugin.
By Susan Shand
02 December 2020


A shiny piece of steel about 3.4 meters tall appeared last month in the red-rock desert of the American state of Utah. Just ten days later, it disappeared. Only a few rocks remained to mark the spot where the monolith once stood.

A photographer from neighboring Colorado said he knew exactly what had happened.

Ross Bernards, the photographer, wrote on Instagram that he saw four men take it down last Friday. The men "pushed it almost to the ground on one side, before they decided to push it back to the other when it then popped out and landed on the ground with a loud bang." 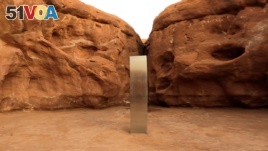 A metal monolith is seen in Red Rock Desert, Utah, U.S., November 25, 2020, in this still image obtained from a social media video. @davidsurber_ via REUTERS

Bernards wrote one of the men said "this is why you don't leave trash in the desert." The group broke the monolith into pieces, loaded it onto a carrier and left, saying "leave no trace."

Bernards did not take photos of the removal. But he posted a cell phone photo of the men taking down the monolith. It was said to be taken by his friend.

On Tuesday, Andy Lewis of Utah confirmed that he and his team had removed the monolith. He wrote on Facebook, "On the night of November 27, 2020, at about 8:30pm— our team removed the Utah Monolith. We will not be including any other information, answers, or insight at this time." Lewis also added a short video showing a group of men removing the object.

The local sheriff's office has said it is not planning an investigation into the disappearance of the monolith, which had been placed without permission on public land. But officials also said they would accept new information from any of the hundreds of visitors who walked out to see the otherworldly object in the desert.

The mysterious structure brought international attention and caused many to wonder about its creator. The New York Times reported that some believe it was the work of artist John McCracken who died in 2011. His son, Patrick McCracken, told the paper that his father said in 2002 "he would like to leave art in remote places to be discovered later."

For Bernards, the visitors' damage to the area convinced him that the desert is better off without the structure.

"Leave the art to places where art should be and let Mother Nature have her space for art," he said.

Utah is not the only place a monolith has appeared. A similar metal structure was found on a hill in northern Romania, in the city of Piatra Neamt. It has also disappeared. Whoever placed the object did not get a permit, Mayor Andrei Carabelea said in a Facebook post. He added that teenagers from outer space might be responsible for both structures.

"I am honored they chose our city," he said.

The Associated Press reported on this story. Susan Shand adapted it for Learning English. Hai Do was the editor.

monolith - n. a stone that was put in position by people as a monument or for religious reasons

pop - n. to suddenly break open or come away from something often with a short, loud noise

trash – n. things that are no longer useful or wanted and that have been thrown away

sheriff – n. an elected official who is in charge of enforcing the law in a county or town of the U.S