Update Required To play the media you will need to either update your browser to a recent version or update your Flash plugin.
By Anna Matteo
24 December, 2016


Welcome to Words and Their Stories, a VOA Learning English program.

This week we continue learning about cold weather expressions with the story "Mystery at The Ice Castle Inn."

In the first part of our story, we met the characters: Madeline, the teacher; Vincent, the athlete; Sylvia, the actress; and Major Jack, the ex-military man.

They have all traveled to The Ice Castle Inn. This mountain inn is a popular vacation spot for birdwatchers. 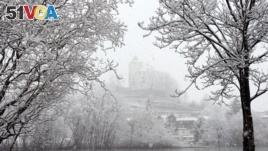 However, a cold snap has blown through the mountains, snowing them in. This is an extreme and unexpected drop in temperature, so no one is prepared. They have been trapped inside the castle for several days.

When people are stuck inside together with nothing to do, they naturally begin talking about themselves.

Very quickly, small facts about a person snowball into a bigger picture of them. What this means is that these little facts collect more little facts -- like a snowball collecting more and more snow as it rolls downhill. Soon, it becomes a big ball of facts, rolling quickly down the hill, threatening to destroy everything in its path!

But I am getting ahead of myself.

One of these small facts is this: no one here is actually interested in birds.

Our four travelers gather inside by the fireplace. The inn's housekeeper puts a log into the fire. The group does not notice her as she pours more hot cocoa into their empty mugs. You see, they are the kind of people who never really notice the servants.

No one is talking. The four guests have avoided each other for several days. But now they are forced together by the warmth of the only working fireplace and the promise of hot cocoa.

After all, the inn is quite cold and uncomfortable. Only candles light the rooms. The rugs are so thin that the stone floor underneath shows. Some of the windows are cracked, letting the winter storm blow right through.

The castle looks the same way it did a hundred years ago. It is a place frozen in time.

Finally, Sylvia, the actress, breaks the ice by talking about the winter storm raging outside. Talking about the weather is a common ice-breaker that can bring strangers together. It gives them something to talk about.

"This cold snap is lasting a long time! When will we be able to leave?"

Sylvia says this to no one in particular. But the teacher, Madeline, responds. "Yes, when can we leave? I am tired of sitting around in this cold, drafty castle."

"I have an idea," Vincent, the handsome athlete, says to the young teacher. "Why don't you join me for a walk in the castle."

Madeline stares at him with her cold, green eyes and says, "That will happen when hell freezes over."

At that, the actress, Sylvia, laughs out loud. "Well, that is a much better way of saying ‘absolutely not!'"

Vincent realizes that he is now on thin ice with both women. He is not really in danger. Rather, he is now on very uncertain terms with them. The room suddenly drops a couple more degrees -- and not from the weather.

Major Jack feels sorry for Vincent after the women freeze him out, or make him feel unwelcome. So, the military man offers him a cigarette. Vincent shakes his head no. He says he quit cold turkey last year. The major says he admires the athlete's accomplishment. He adds that he has never been able to quit smoking all at once.

"Well, perhaps you don't have the mental strength that I do," Vincent says.

Major Jack regrets trying to help such a cold-hearted man.

He turns his attention to Sylvia. He tells her he likes her voice very much. Most women would melt at his words. But for Sylvia they cut no ice. His words have no effect. Her once-friendly voice turns to ice as she says, "What shall I do next, sing for you?"

He shudders, not from the temperature of the room but from her icy stare. He thinks to himself that the attractive actress can certainly be an ice queen when she wants to be.

At this point, it is fair to say that the conversations among the group are not going well. Outside, the temperature is dropping. Everything is frozen solid. Inside, the entire inn is in a different kind of deep freeze. Everyone sits in silence.

They stare at the fire as it makes crackling noises in the fireplace. Next to it, only a few logs of wood remain.

This is when the very quiet housekeeper breaks the stone cold silence. She straightens her back, takes off her apron and pushes her gray hair back into place.

"If I may have your attention," she says to the group. Her voice cuts through the coldness that hangs in the air.

"The owner of the inn has planned an interesting game for you, our special guests, to play."

Vincent quickly throws cold water on the idea. He laughs and says coldly, "I'm not a child. I don't play games."

"You may want to change your mind, young man. This game is a kind of treasure hunt," the housekeeper says.

She is standing in front of the group and no longer seems like "just" a servant. She now has control of the room. When they hear the word "treasure," they pay close attention to the housekeeper for the first time since their arrival.

She places a large wooden box on the table. It is labeled "Treasure Hunt."

She explains: "In this box are four envelopes marked with each person's name. In the envelope are clues. If you follow the clues correctly, you will find your treasure!"

They all agree to play. They are thinking that finding some cold, hard cash would be a really nice treasure.

They pick their envelopes and read the clues carefully. Then, each person travels through the empty hallways and rooms of the otherwise deserted castle.

Three hours later, the sun sinks behind the cold mountains. The four treasure-seekers return to the fireplace. The housekeeper is waiting. She motions with her hand for them to sit by the fire. And, one by one, she asks them to reveal their treasure.

Madeline is first. "My treasure is a framed termination letter? I don't understand. I am being fired for something?" The calm in her eyes is gone and for the first time she is nervous.

Vincent is not confused or nervous. He is simply angry. "My treasure a bride's white wedding veil." He throws the thin, white piece of fabric into the air.

Major Jack takes out what he found -- a military medal. He reads the writing on the front: "For brave service in battle." He looks as if he has seen a ghost.

Sylvia's "treasure" is a pink baby's rattle. With a haunted look on her face, she shakes it slowly and sadly.

Confusion and tension fill the room. Finally Sylvia, who is standing by the fire as if she were on stage, says what everyone is thinking.

"Okay this is too much! And it isn't funny! Why are we here? And who is teasing us with these so-called treasures?"

The housekeeper begins to speak, but suddenly she stops. A terrible sound -- part human, part animal, howling from a room above them -- freezes their blood cold.

And that is we will leave our story. Join us next week for the exciting conclusion of Mystery at The Ice Castle Inn on Words and Their Stories!

drafty – adj. having cold air moving through in a way that is unpleasant or uncomfortable

accomplishment – n. the successful completion of something

crackling – adj. a series of short, sharp noises — usually singular : <We heard a crackling of leaves behind us.>

reveal – v. to make (something) known

termination – n. the act of making a person leave a job : the act of firing or dismissing someone

tension – n. a feeling of nervousness that makes you unable to relax

tease – v. to laugh at and criticize (someone) in a way that is either friendly and playful or cruel and unkind

so-called – adj. used to indicate a name or description that you think is not really right or suitable