Update Required To play the media you will need to either update your browser to a recent version or update your Flash plugin.
By Dan Friedell
09 October, 2016


When she was a girl, Zandile Mzazi loved to sing. She tried to sing along with stars like Whitney Houston. She did not know her love of singing was the first step towards an opera career.

Mzazi had a good voice from a very young age. She says she was a "skinny little girl" when she won the lead role in a school musical. 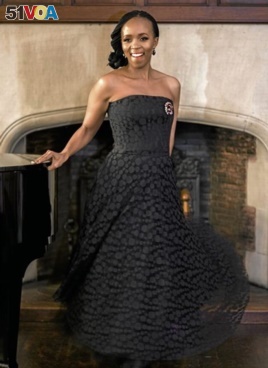 Zandile Mzazi poses during a break from practice at a concert hall in Rome.

But she was showing off her strong voice even on the day she was born.

"My mom said when I was born, the first day I cried so much! She said, ‘My gosh! Those lungs! The nurses from the entire floor of the hospital, they came because they thought maybe we were slaughtering this child, you know!'"

Mzazi got her professional start singing religious music called oratorio. The music is like opera, but the music has religious themes. Handel's "Messiah" is a well-known example of oratorio.

She first heard that kind of music from her aunt. And just like when she listened to pop music, she could sing along with Handel's composition.

"And I could sing the ‘Messiah,' jeepers; from the age of nine! I listened to opera recordings, and I imitated the sound that I was hearing. Little did I know that actually I had something very special."

As a teenager, she heard a South African opera singer on television. She started to sing along. That is how she discovered opera. One thing she likes about opera, she said, is its "sadness and drama."

Mzazi also said opera music is right for her talent. She said she does not think she has a big voice, but her tone is a good fit for opera.

"Whenever I perform and I hear my sound ... it shocks me, because it is really incredible that I am so blessed with this instrument."

The instrument of her voice carried Mzazi from local shows to a performance in front of Nelson Mandela. She also sang for the president of China – in Mandarin.

Last July, she went to Europe for a voice competition. Mzazi came in first out of 80 singers from around the world.

Now Mzazi is planning to go to Europe to continue her career. But she still calls South Africa home.

Darren Taylor wrote this story for VOANews. Dan Friedell adapted it for Learning English. Kelly Jean Kelly was the editor.

Will you look for future performances from Zandile Mzazi? We want to know. Write to us in the Comments Section or on 51VOA.COM.

slaughter –v. to kill in a very violent way

imitate –v. to do the same thing as (someone)

drama –n. a play, movie, television show, or radio show that is about a serious subject and is not meant to make the audience laugh

tone –n. the quality of a person's voice

bless –v. to provide (a person, place, etc.) with something good or desirable