Update Required To play the media you will need to either update your browser to a recent version or update your Flash plugin.
By Hai Do
09 May, 2019


The United States says it has seized a North Korean ship that was used to violate international sanctions. The incident was announced hours after North Korea fired what appeared to be two short-range, or distance, missiles on Thursday.

The "Wise Honest" is North Korea's second largest cargo ship. It was used to transport North Korean coal to China, Russia and other countries.

American officials said it was detained during an April 2018 stop in Indonesia. The ship will be moved to American Samoa in the Pacific. Officials made the announcement just hours after North Korea fired the missiles. But they said the announcement was not related to the missile launch.

South Korean officials said the weapons launched on Thursday traveled 420 kilometers and 270 kilometers before falling into the sea.

It was the second weapons launch from North Korea in five days. It came as U.S. Special Representative for North Korea Stephen Biegun visits South Korea. North Korea has also withdrawn from talks about its nuclear program with the U.S. since a meeting in Vietnam.

"North Korea seemed to be discontented it could not reach a deal in Hanoi," South Korean President Moon Jae-in told broadcaster KBS. He was speaking of the February meeting between North Korean leader Kim Jong Un and American President Donald Trump.

In the KBS interview, Moon also warned North Korea of the risk of a misunderstanding that could result from its actions. He said the South will explore ways to help bring back nuclear talks, including providing food aid to the North and pushing for a fourth meeting between Kim and Moon. 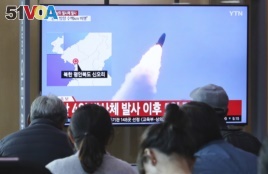 What does Kim want?

Yang Uk, a top research fellow at the Korea Defense and Security Forum spoke to Reuters. He said about North Korea, "I believe they will keep escalating by using what appear to be short-range missiles, something that will not cause the U.S. to react right away."

Harry Kazianis is with the Center for the National Interest in Washington. He said the new launches could only worsen the growing tensions. "North Korea has now made it clear it will not halt developing other parts of its military capabilities that threaten the region," he said.

Cha Du Hyeogn is a visiting scholar at Seoul's Asan Institute for Policy Studies. He said North Korea is pressuring South Korea to turn away from the United States and support North Korea's position more strongly.

Cha added that by firing weapons that threaten South Korea but not the U.S., North Korea could be testing the Americans without causing the collapse of the nuclear talks.

A U.S. Defense Department spokesman said after the new tests: "We're aware of the reports and monitoring."

Trump and his administration did not appear to express serious concern over the tests. Over the weekend, Trump wrote on Twitter that he believes a deal could be reached with Kim.

The February meeting in Vietnam between Trump and Kim ended early without an agreement. The U.S. said Kim was only willing to give up North Korea's main nuclear structure at Yongbyon – instead of complete denuclearization. The North Korean leader also demanded that all sanctions against his country be ended.

Trump said at the time, "Basically, they wanted the sanctions lifted in their entirety, and we couldn't do that."

The United States and the United Nations increased sanctions on North Korea in 2017, after the country carried out a series of nuclear and ballistic missile tests. The sanctions have created economic difficulties for North Korea.

Hai Do adapted this story for Learning English based on reports from the Associated Press and Reuters. Caty Weaver was the editor.

sanction - n. an action taken to force a country to obey international laws by limiting or stopping trade

interview - n. an meeting between a reporter and another person to get information for a news story

region - n. part of the world

aware - adj. knowing that something exists

entirety - n. a whole or total amount of something