Update Required To play the media you will need to either update your browser to a recent version or update your Flash plugin.
By VOA
19 July, 2015


Editor's note: James G. Mwangi, English teacher, aspiring journalist and Director of Mavens Education Centre in Kenya, wrote this story after taking the VOA Learning English online course, "Writing for the Internet" at the American Resource Center of the U.S. Embassy in Nairobi, Kenya. His story is the first place winner of the contest sponsored by the embassy and VOA Learning English.

As the traffic in Nairobi worsens, primary school pupils who depend on public transportation seem to be suffering the most as they try to keep up with the demands of school.

Some private and public primary school pupils wake up as early as 4:00 am to beat the traffic and be in class on time. In the evening, the pupils are also caught up in traffic. They may arrive home as late as 6:30 to 7:30 pm. 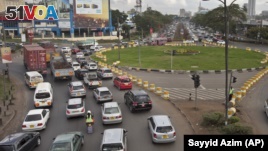 Drivers sit at a traffic circle with its exits blocked off by barriers to prevent right turns, on a highway in downtown Nairobi, Kenya Tuesday, April 14, 2015. (AP Photo/Sayyid Azim)

The current floods in the city have not made life easier for the pupils. Last week, 11 pupils from Makini Schools waited for 10 hours to be rescued when their school bus was nearly covered in water during a traffic jam.

The students were rescued and taken to Boma Hotel. It was almost dawn when their parents came to pick them up. The parents were also caught up in the traffic mess.

"Our timetable has been greatly affected by the traffic, especially on rainy days, as we try to ensure the students and the teachers get home and to school on time," says James Mwangi, the school principal for Mavens Education Centre. He says the problem is even worse for public school pupils who use the ‘matatus'- a public taxi van that provides transport across the city.

"Public school pupils, who mainly use the matatus, are exposed to greater risks as they board and alight from these matatus," he says. Unlike their private counterparts, the matatus don't take them directly to the school and no one is responsible for their safety."

A few years ago, the IBM Commuter Pain Index Report listed Nairobi among cities with the world's longest traffic jams.

"By midday [the] majority of the students are already tired and sleepy, and they find it difficult to concentrate in class," says John Wanyama, a primary school teacher. He adds that the pupils do not finish up their homework properly, as many of them do it without the supervision of their parents. Some of the children may instead be doing homework on the bus.

Susan Wairimu is a mother of two pupils and a businesswoman. "We don't make it home early to spend enough time with our children," she says. "The school also makes it stressful for the pupils as they are given tons of homework in at least three subjects every day."

She notes that many children lack playing time, which can be important for their physical growth. In many schools, the Physical Education (P.E.) and Games lessons have been reduced or even cancelled to cover for the time lost sitting in traffic.

For the past few years, Nairobi County's performance in the Kenya Certificate of Primary Education (KCPE) has met criticism from various stakeholders. Even though traffic congestion is not the only major cause of the poor performance, it highly contributes to it.

Nairobi Governor Dr. Evans Kidero finds it ironic that Nairobi County, which includes the capital, was lagging behind six other counties in 2013 Kenya Certificate of Primary Education (KCPE) examinations.

"The six counties that outperformed Nairobi don't have the resources cited above," he says. "They have to travel to Nairobi to access them. All of us in Nairobi City and County must take matters of education in our own hands to ensure that the performance upholds the status of the county as the capital."

Some estimates say the city of Nairobi loses approximately $1 billion due to traffic delays annually. The cost might be even higher if one considers the burden placed on school children, the nation's future leaders.