Update Required To play the media you will need to either update your browser to a recent version or update your Flash plugin.
By Bryan Lynn
26 September 2021


The American space agency NASA has chosen the moon landing site for a new ice-seeking explorer set to arrive in 2023.

The explorer, or rover, will be sent to an area on the moon's south pole called Nobile Crater. The robotic vehicle is called Volatiles Investigating Polar Exploration Rover, or VIPER.

VIPER's purpose will be "to map and explore the region's surface and subsurface for water and other resources," NASA said in a recent announcement.

Nobile Crater was formed through a crash with a space object. 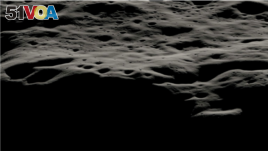 This data visualization shows the mountainous area west of Nobile Crater and the smaller craters that litter its rim at the lunar South Pole. The terrain in the Nobile region is most suitable for the VIPER rover to navigate, communicate, and characterize

VIPER measures 1.5 meters by 1.5 meters by 2.5 meters. It weighs 430 kilograms. Unlike the rovers used on Mars, VIPER can be piloted nearly in real time, because the distance from Earth is much shorter.

VIPER is solar-powered and comes with a 50-hour battery that was built to withstand extreme temperatures. It was designed with the ability to "walk" sideways so that its solar equipment can stay pointed toward the sun.

The mission is part of NASA's Artemis program, which aims to land the first woman and next man on the moon by 2024. The program's long-term goal is to establish a continued human presence on the moon.

NASA says it will be the first mission to explore the surface of the moon's south pole. This is one of the coldest areas in our solar system. So far, it has only been studied by orbiters and satellites observing the moon. Data collected from those observations led scientists to believe that ice and other resources likely exist in areas near the moon's poles. Some of these areas remain permanently blocked from the sun.

NASA says such areas can reach temperatures as low as minus 248 degrees Celsius. Scientists believe the south pole's frozen water could date back billions of years.

Lori Glaze is the director of NASA's planetary science division. She told reporters: "The rover is going to get up close and personal with the lunar soil, even drilling several feet down."

NASA says the search for ice on the moon is important because it is seen as a necessary resource for future exploration activities. Astronauts could use the ice for drinking water and to cool equipment or make rocket fuel for missions deeper into the solar system.

NASA says it chose a mountainous area on the western edge of the Nobile Crater for the landing because it contains many "nearby sites of scientific interest." It also has surface areas that the rover can effectively explore.

Daniel Andrews is overseeing the VIPER project. He said in a statement that "years of study" had gone into examining the polar area the rover will explore. "VIPER is going into uncharted territory -- informed by science -- to test hypotheses and reveal critical information for future human space exploration."

NASA hopes the data and samples that VIPER collects will help scientists find other places where water might exist on the moon. The mission also aims to help NASA better understand how frozen water first reached the moon and how it was able to survive for billions of years.

Bryan Lynn wrote this story for VOA Learning English, based on reports from NASA and Agence France-Presse. Ashley Thompson was the editor.

drill – v. to use a tool or machine to make holes in a hard substance

uncharted – adj. an area that has not had a map made of it and has not been described

hypothesis – n. an idea or explanation for something that is based on known facts but has not been proven

reveal – v. make known something that is surprising or that was previously secret