Update Required To play the media you will need to either update your browser to a recent version or update your Flash plugin.
By VOA
06 August, 2012

LAUREL BOWMAN: There will be several weeks of tests before NASA lets its robotic vehicle, called Curiosity, explore the surface of Mars. Curiosity will look for evidence that the planet once might have had conditions necessary for supporting life. But first, scientists and engineers did a little celebrating at the Jet Propulsion Laboratory near Los Angeles, California.


The space agency described Curiosity's fall through the Martian atmosphere as "seven minutes of terror." But the landing went as planned. Engineers said it was the most complex landing ever attempted.

A short time later, Curiosity sent a picture back to Earth. It showed one of the vehicle's six wheels on the surface of the planet. 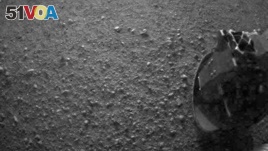 One of the first images from the red planet
President Obama, in a statement, said the landing made history. His science adviser John Holdren also praised the work.

JOHN HOLDREN: "If anybody has been harboring doubts about the status of U.S. leadership in space, there is a one-ton automobile-sized piece of ingenuity, and it is sitting on the surface of Mars, right now, and it should certainly put any such doubts to rest."

The nuclear-powered rover will spend two years cutting into Martian rocks and collecting soil to examine. Scientists hope to find whether the planet could have supported life in the form of microscopic organisms. I'm Laurel Bowman.
Related Articles
go top