Update Required To play the media you will need to either update your browser to a recent version or update your Flash plugin.
By Bryan Lynn
24 April 2022


A doctor with the American space agency NASA has made a virtual visit to the International Space Station (ISS) after being "holoported" by technology.

The agency said it was the first time that humans had been "holoported" from Earth to space. The term holoport is a combination of the words hologram and teleport. 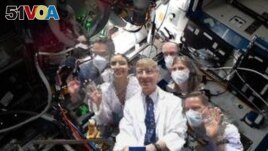 A hologram is an image produced by a computer and made of light. Hologram objects appear in a shapely form, not flat like other images. Teleport means to travel extraordinarily fast using special technology. Such technology does not exist, however.

Holoport technology can project 3D models of people in any environment. This permits people physically present in the environment to see, hear and interact with the holoported individuals.

The experiment at the ISS involved a computer, camera and special software developed by NASA and its industry partner Aexa Aerospace. Special headsets enable people involved to interact with one another as if they were in the same shared space.

The camera used was the Kinect model, made by American software company Microsoft. The camera can be combined with Microsoft's HoloLens 2 headset device.

While Microsoft has been using holoportation technology for several years, NASA said it was the first time it had been used "in such an extreme and remote environment such as space."

Similar technology has been used to assist doctors performing remote operations and in telemedicine. Telemedicine is a way for people to talk to doctors and receive health care without having to visit a medical office, treatment center or similar place.

Schmid described the technology as "a completely new manner of human communication across vast distances." He said the process represents "a brand-new way of human exploration, where our human entity is able to travel off the planet."

During the experiment, Schmid was able to speak with Thomas Pesquet, a European Space Agency astronaut aboard the ISS. Aexa Aerospace chief Fernando De La Pena Llaca and several members of the company's technology team also took part in the holoportation event.

NASA said the technology demonstrates a new form of communication it plans to use on future space missions. It could permit people on Earth to be holoported to space, as well as send astronauts on virtual visits to Earth.

Schmid said the system could be used to hold private medical, psychiatric and family meetings and to virtually bring important people to the space station to visit astronauts. He added that the next step could be to combine holoportation with augmented reality technology.

Augmented reality, or AR, is a technology that can project computer-created imagery onto headsets like the HoloLens 2. The images appear in the headsets along with other physical objects in the environment. AR has been used to help guide workers through complex industrial processes.

"Imagine you can bring the best instructor or the actual designer of a particularly complex technology right beside you wherever you might be working on it," Schmid said.

NASA said holoportation technology could greatly improve future missions into deep space. It said one of the most important uses could be to provide better and more personal communication between astronauts and people on Earth. The communication could be necessary for medical or mission support reasons. And, it could improve connectivity among astronauts in space and their families back home.

But NASA noted one possible challenge that could happen in future, planned missions to Mars. Technology systems will have to find a way to effectively operate with communication delays of up to 20 minutes each way during travel to and from Mars.

Bryan Lynn wrote this story for VOA Learning English, based on reports from NASA, Axiom Space, Aexa and Microsoft.

3D (three-dimensional) – adj. having or appearing to have length, depth and height

psychiatric – adj. the study and treatment of mental illness