Update Required To play the media you will need to either update your browser to a recent version or update your Flash plugin.
By Bryan Lynn
19 April 2021


NASA's Ingenuity helicopter has successfully completed a takeoff and landing on Mars.

The U.S. space agency says Monday's flight was historic because it marked the first time any aircraft had performed powered, controlled flight on another planet.

The flight was announced Monday by flight controllers at NASA's Jet Propulsion Laboratory (JPL) in California. The team said it was able to confirm the flight after receiving data and images from its Mars explorer, Perseverance. The explorer was carrying Ingenuity when it successfully landed in Mars' Jezero Crater in February.

NASA said the solar-powered experimental aircraft lifted off the surface of Mars at 10:34 UTC. Controllers chose the day and time based on Ingenuity's readiness and when flight conditions were acceptable. 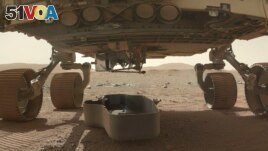 This March 21, 2021 photo made available by NASA shows the released debris shield, center, for the Ingenuity helicopter, dropped on the surface of Mars from the bottom of the Perseverance rover. (NASA/JPL-Caltech/MSSS via AP)

Ingenuity climbed about 3 meters and hovered for 30 seconds before landing safely on the surface, NASA reported. It added that Ingenuity's first flight was autonomous. That means the aircraft piloted itself with the help of built-in guidance and control systems developed by JPL's team.

The space agency said the operation "was full of unknowns" because of the very different conditions on Mars compared to Earth. For example, gravity's pull on the surface of Mars is one-third of Earth's. And the Red Planet's atmosphere is much thinner, with one percent of Earth's atmospheric pressure. To complete a successful flight, engineers said the helicopter's blades needed to spin five times faster than they would have to on Earth.

The space agency said data must be sent and received from Mars using orbiting satellites and land-based communication systems. Because of this, the helicopter "cannot be flown with a joystick," NASA said in a statement. The flight of the 49-centimeter tall vehicle also was not observable from Earth as it happened.

Perseverance acted as a communications link between the helicopter and Earth. It also documented Ingenuity's activities with its high-tech imaging equipment. Ingenuity itself does not contain scientific instruments. It was designed only to demonstrate whether such aircraft could be valuable in future exploration activities on Mars or other planets.

The first picture captured was a black and white image showing the helicopter's shadow as it hovered above Mars. Next came color video of Ingenuity's landing that was taken by Perseverance.

Acting NASA Administrator Steve Jurczyk praised the successful flight in a statement. "Ingenuity is the latest in a long and storied tradition of NASA projects achieving a space exploration goal once thought impossible," he said.

Additional flight tests are to be carried out, with plans to see if Ingenuity can go a little higher and farther each time. NASA said such helicopters could assist astronauts on future search and collection missions.

After Ingenuity's successful flight, project leader MiMi Aung said: "We've been talking so long about our Wright Brothers moment, and here it is."

Bryan Lynn wrote this story for VOA Learning English, based on reports from NASA, The Associated Press and Reuters. Mario Ritter, Jr. was the editor.

hover – v. to stay up in the air but without moving anywhere

blade – n. an arm of a propeller that spins to lift an aircraft off the ground

joystick – n. a handle used to control movements of a computer game, machine or aircraft

achieve – v. to succeed in doing something

indicate – v. to show that something exists or is likely to be true