Update Required To play the media you will need to either update your browser to a recent version or update your Flash plugin.
By Bryan Lynn
28 June 2022


The American space agency NASA has launched a satellite designed to test a new orbit around the moon.

The satellite is called a CubeSat. CubeSats are small research spacecraft also known as nanosatellites. They provide a low-cost way for scientists, governments and private organizations to carry out space experiments. 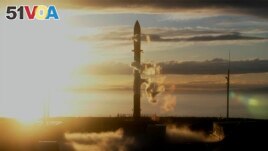 In this photo released by Rocket Lab, Rocket Lab's Electron rocket sits on the launch pad on the Mahia peninsula in New Zealand on May 17, 2022. (Rocket Lab via AP)

The CubeSat launched Tuesday weighs about 25 kilograms. The satellite is owned by the U.S.-based company Advanced Space.

NASA is calling its CubeSat mission CAPSTONE. The small satellite will be the first to take a new path around the moon.

NASA said the mission is meant to support research for the agency's Artemis program. Artemis aims to land American astronauts on the moon by 2025. It would mark the first human visit to the moon since NASA's Apollo 17 landing in 1972.

NASA reported the launch of the CAPSTONE CubeSat went well. Getting the satellite into orbit will take more than four months and will be done in three stages.

Over the next five days, Rocket Lab's Lunar Photon upper stage booster rocket is expected to raise the CubeSat's orbit further and further from Earth. After that, Photon's engines will fire a final time, permitting CAPSTONE to escape Earth's orbit and head for the moon.

The CubeSat "will then use its own propulsion and the sun's gravity to navigate the rest of the way to the Moon," NASA said in a statement. This gravity-driven path is expected to greatly reduce the amount of fuel the CubeSat needs to get to the Moon.

NASA calls the orbiting path CAPSTONE will test "a gravitational sweet spot in space." The path represents a point "where the pull of gravity from Earth and the Moon interact to allow for a nearly-stable orbit."

In the future, NASA plans to build a lunar space station called Gateway in this same orbital path. The station could be a launching point for astronauts to travel to the moon's surface as part of its Artemis program.

The CubeSat is expected to collect and send data about its orbiting activities back to Earth for at least six months.

stage – n. a period of development, or a particular time in a process

booster – n. an engine on a spacecraft that gives extra power for the first part of a flight

navigate – v. to find the right direction for traveling by using maps or other equipment

stable – adj. not likely to change or end suddenly