Update Required To play the media you will need to either update your browser to a recent version or update your Flash plugin.
By Bryan Lynn
17 April 2022


The American space agency NASA is experimenting with ways to build huge telescopes with fluid materials. Such devices could permit astronomers to examine older and more distant space objects.

In January, NASA announced the deployment of its "largest and most powerful" telescope ever built, the James Webb Space Telescope. It aims to build on the work of past telescopes, while gathering in-depth information on the early development of the universe. 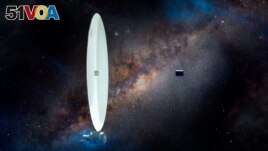 But NASA is seeking to greatly expand the size of its telescopes, up to 100 times over ones currently in use. One way to do this is to build lenses using fluid materials.

NASA has been carrying out experiments to see if fluids can be used to create telescope lenses in microgravity conditions. The goal is to establish a method that could be used by astronauts in space to create lenses after transporting the necessary materials.

Much of the research centers on exploring how liquids behave in microgravity. NASA notes in a description of its experiments that all liquids contain a force that holds them together at their surface. This force is called surface tension.

One experiment is called the Fluidic Telescope Experiment, or FLUTE. It is a joint project involving NASA's Ames Research Center in California, the Goddard Space Flight Center in Maryland and the Israel Institute of Technology, known as Technion.

FLUTE's main investigator is Edward Balaban. He said in a statement the way liquids behave in microgravity can be a good fit for producing large telescopes or other optical elements.

"In microgravity, liquids take on shapes that are useful for making lenses and mirrors," Balaban said. "So if we make them in space, they could be used to build telescopes that are dramatically bigger than was previously thought possible."

FLUTE team members have carried out experiments on the ground and in the air to test different liquid materials. In one test, scientists combined water with chemical mixes in search of a good material to make telescope lenses. The tests simulated a weightless environment.

Researchers involved in the experiments said they were able to easily create lenses in a container. They reported that the resulting lenses had surface qualities similar to, or even better than, lenses produced with costly equipment.

In December, the FLUTE team carried out experiments on two zero gravity airplane flights. Such flights involve an airplane climbing and falling at different altitudes in an effort to produce brief microgravity conditions. The team had 50 chances to reach 15 to 20 second periods of microgravity for testing.

Moran Bercovici, a professor of Mechanical Engineering at Technion, helped lead the experiments. He said the team used pumps to push different oil materials into a circular frame. In a few seconds, Bercovici said, "we were able to create a free-standing liquid lens – until the plane lifted upwards again and gravity kicked in and the oils oozed out."

The experiment produced hardened lenses. Bercovici and his team plan to complete more experiments in the coming months to test how different fluids keep their shape in microgravity.

One FLUTE project experiment will be carried out aboard the International Space Station (ISS). It is to be completed by private astronaut Eytan Stibbe, the second Israeli to go to space. He launched to the ISS on April 8, along with three other private astronauts.

Stibbe will attempt to use polymer material, like in the Technion laboratory experiment, to create lenses in full microgravity. The lenses will then be transported back to Earth for close examination.

Balaban said: "If our (ISS) experiment is successful, it will be the first time an optical component is made in space. It feels a bit like making history."

Bryan Lynn wrote this story for VOA Learning English, based on reports from NASA, the Ramon Foundation and Axiom Space.

lens – n. a piece of equipment, made of glass or plastic, with a curved surface that is used to make images larger or cleaner

optical – adj. relating to light or the ability to see

mirror – n. a piece of glass with a shiny metallic material on one side that produces an image of anything that is in front of it

previous – adj. existing or happening before something else

simulate – v. to do or make something that looks real, but is not

ooze – v. to come out of something

component – n. one of the parts of something, especially a machine