NASA Looks to Solar to Power New Generation of Spacecraft

Update Required To play the media you will need to either update your browser to a recent version or update your Flash plugin.
By Bryan Lynn
05 December 2021


The American space agency NASA recently launched its DART spacecraft to test a method to defend Earth against threatening asteroids.

NASA says the DART mission is also testing several new technologies. One of them is a propulsion system that gets power from the sun. The technology is called solar electric propulsion. 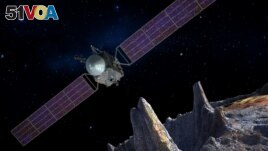 This artist illustration depicts NASA's Psyche spacecraft, which will conduct a direct exploration of an asteroid thought to be a stripped planetary core. (NASA/JPL-Caltech)

Since the system uses solar power instead of fuel-based engines, it does not need large, heavy fuel tanks. If the technology is successful, it could help power a new generation of spacecraft.

NASA officials have said solar electric propulsion can be important to the agency's plans for future exploration. This could include planned missions to take astronauts to the moon and Mars.

The solar-powered system included on the DART mission is known as NEXT-C. It was developed by NASA's Glenn Research Center in Ohio and built by rocket maker Aerojet Rocketdyne.

The technology is based on systems used on NASA spacecraft in the past that carried out asteroid exploration missions. Scientists working on NEXT-C development said the new system is expected to be "about three times as powerful" as ones used in the past.

The Psyche spacecraft will travel to a metal asteroid orbiting the sun between Mars and Jupiter. NASA says it expects to launch Psyche in August. The spacecraft is to travel about 2.4 billion kilometers over three-and-a-half years to reach the asteroid.

Once in orbit, the mission team will examine data gathered by Psyche's science instruments. Scientists believe the asteroid may be part of the metallic core of an early planet. They say the asteroid could have separated during violent crashes that happened during our solar system's early formation.

NASA says once Psyche separates from its launch vehicle, it will depend on solar electric propulsion to reach its target. The spacecraft is also expected to get a gravitational push when it passes by Mars.

The space agency says Psyche will be the first spacecraft to use the solar propulsion thrusters beyond the orbit of our moon. NASA describes the thrust as "gentle," but strong enough to propel the spacecraft on its long trip.

NASA said testing has shown that the system is highly effective. Scientists estimate that Psyche's thrusters "could operate for years without running out of fuel."

Lindy Elkins-Tanton, of Arizona State University, is a NASA investigator and leads the Psyche mission. "Even in the beginning, when we were first designing the mission in 2012, we were talking about solar electric propulsion as part of the plan," she said in a statement. "Without it, we wouldn't have the Psyche mission."

Paulo Lozano directs the space propulsion laboratory at the Massachusetts Institute of Technology (MIT). He told MIT Technology Review that he thinks Psyche can help create a path to new solar-powered space exploration. The technology could permit longer and less costly missions. "It actually opens up the possibility to explore and to commercialize space in a way that we haven't seen before," Lozano said.

Bryan Lynn wrote this story based on reports from NASA and MIT Technology Review. Mario Ritter, Jr. was the editor.

core – n. the center part of a planet

gentle – adj. not strong or severe

commercialize – v. to organize something with the goal of making a profit