Update Required To play the media you will need to either update your browser to a recent version or update your Flash plugin.
By Bryan Lynn
18 September 2022


The American space agency NASA is making final preparations to crash a spacecraft into an asteroid in the world's first planetary defense test.

The mission is called the Double Asteroid Redirection Test, or DART. The DART spacecraft launched on its trip to the asteroid last November. On September 26, it will aim to strike the asteroid to see how the crash affects the space object's path.

The test is designed to demonstrate a possible method for changing the direction of asteroids considered threats to Earth. 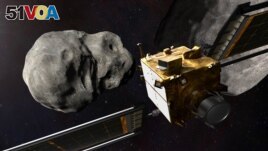 This artist's illustration depicts NASA's DART spacecraft, which will be launched to crash into an asteroid to see how the crash affects the space object's path. (Image Credit: NASA/Johns Hopkins APL)

The mission's target will be an asteroid called Dimorphos, which is part of a two-body asteroid system. Dimorphos is a small "moonlet" that orbits a larger asteroid named Didymos. Didymos is about 780 meters across, while Dimorphos is 160 meters.

The asteroid system does not present any danger to Earth. But NASA says it is being targeted as a more effective way to test the crash method instead of striking a single asteroid flying through space.

The goal of the DART mission is to see how the spacecraft crash will re-direct the asteroid's path and speed. The crash will happen about 11 million kilometers from Earth.

Currently, Dimorphos completes one orbit around Didymos every 11 hours and 55 minutes. The separation between the centers of the two asteroids is 1.18 kilometers. The DART spacecraft will aim to hit Dimorphos nearly head-on. When this happens, it will shorten the time it takes the small asteroid moonlet to orbit Didymos by several minutes, NASA explains.

Telescopes on Earth will measure the change in the orbital period.

NASA engineers have said they are hoping for a change of at least 73 seconds for the mission to be considered a success.

Earlier this month, NASA announced the DART spacecraft had gotten its first look at the asteroid system. A series of images were taken July 27 by an imaging instrument on the spacecraft. The images showed light given off by the Didymos system.

NASA said at the time the images were captured, the spacecraft was about 32 million kilometers away from the two asteroids. This made it difficult to see much of the Didymos system. But after the pictures were combined and examined, the team was able to improve the image quality and identify its location.

Elena Adams is the DART mission systems engineer at the Johns Hopkins Applied Physics Laboratory (APL) in Laurel, Maryland. She said, "This first set of images is being used as a test to prove our imaging techniques." Adams added that the imaging instrument is what will guide the DART spacecraft to its asteroid target.

In the final hours before the crash, the spacecraft will need to see and process images of the asteroid system as it travels by itself to the target without human involvement, NASA said.

The DART operation will be captured in images taken by a CubeSat. CubeSats are small research spacecraft also known as nanosatellites.

The 14-kilogram CubeSat that will capture the images is called LICIACube. It is a project of the Italian Space Agency. It was designed and built by the Italian space engineering company Argotec. LICIACube is set to be deployed from the spacecraft about 10 days before the crash.

LICIACube is equipped with two separate cameras. They are designed to collect scientific data and inform the CubeSat's self-guiding system. The cameras will continually capture the asteroid crash as well as the resulting effects of the operation.

Elisabetta Dotto is a member of the LICIACube scientific team at the National Institute for Astrophysics in Rome. She said in a statement that she and other scientists are "eager" to receive and examine the images captured by the CubeSat. "It will be so exciting to study, for the first time, the nature and structure of such weird objects as binary [near-Earth asteroids]."

Bryan Lynn wrote this story for VOA Learning English, based on reports from NASA and The Associated Press.

location – n. the place where something happens

eager – adj. wanting to do something very much