NASA Working Toward Mission to Mars

Update Required To play the media you will need to either update your browser to a recent version or update your Flash plugin.
By Anne Ball
11 May, 2015


The head of the National Aeronautics and Space Administration, or NASA, said that the space agency is on track to land people on Mars in the 2030s.

Charles Bolden is the administrator for NASA. He said that five years ago, President Obama set that goal for the space agency.

Buzz Aldrin was the second man to step on the moon. He is retired from NASA but is working to get humans to Mars. He told the summit that "we need to stimulate the public to be supportive" of a U.S. mission to Mars. The program, Mr. Aldrin said, needs to develop in a series of stages, or steps, over several years. 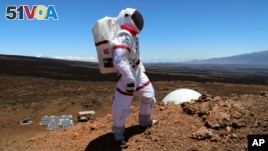 In this June 4 2013 photo provided by the University of Hawaii, research space scientist Oleg Abramov walks outside simulated Martian base at Mauna Loa, Hawaii. Six researchers have spent the past four months living in a small dome on a barren Hawaii lava field at 8,000 feet, trying to figure out what foods astronauts might eat on Mars and during deep-space missions. (AP Photo/University of Hawaii, Angelo Vermeulen)

NASA engineer Bret Drake said that is the idea that several private companies have offered.

Explore Mars, Inc., is the group that organized the Humans to Mars summit last week. The group released a study on the steps required to send people to Mars.

They are a new Space Launch System, Orion spacecraft, a deep space environment for astronauts to live in, and new methods for entry, descent and landing. Other new technologies needed are solar electric propulsion for power and a vehicle that could land people on Mars.

NASA is already working with private partners to develop the technology needed to get humans to Mars. They are working to develop advanced propulsion and habitation—where and how people will live on Mars once they get there.

One example is Lockheed Martin's Stepping Stones plan. It calls for beginning flights to the International Space Station using today's vehicles and Orion spacecraft. Later flights will land on Deimos, one of Mars' two moons.

Last week NASA also announced a "Journey to Mars Challenge." The agency is asking for ideas from the public on how to get people to Mars and how they can stay. The ideas could be about shelter, food, water, breathable air, communication, exercise, social relations and medicine. NASA said people are "encouraged to consider innovative and creative elements beyond these examples."

The Mars rovers Curiosity and Opportunity are already providing much information as they move across the Martian surface. It is already known that at one point in time Mars had conditions that could have supported life.

NASA's Charles Bolden said that Mars "just might help us to unravel the age old mystery about whether life exists beyond Earth."

Anne Ball wrote this story from material including VOA news and NASA. Hai Do was the editor.

summit - n. a series of meetings

sustainable - adj. able to last for a long time

propulsion – n. the force that moves something forward

solar – adj. having to do with the sun

challenge – n. to invite someone to compete in competition

innovative – adj. new ideas about something

unravel – v. to find the correct explanation for something