Update Required To play the media you will need to either update your browser to a recent version or update your Flash plugin.
By Bryan Lynn
11 December 2022


The American space agency NASA says its Orion spacecraft has performed beyond expectations during its test mission to fly around the moon.

Orion is set to return to Earth on December 11. NASA said the uncrewed spacecraft will re-enter Earth's atmosphere and deploy a parachute before splashdown in the Pacific Ocean off the coast of California near San Diego.

The spacecraft, or capsule, made its second and final close pass by the moon on December 5. The move brought Orion to within 127 kilometers of the lunar surface. This was the closest any spacecraft built to carry humans has come to the moon since NASA's Apollo 17 mission in 1972. 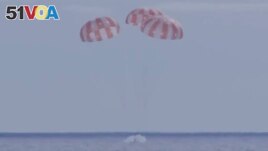 This photo provided by NASA shows the Orion capsule coming back from the moon. The capsule made a blisteringly fast return Sunday, Dec. 11, 2022, parachuting into the Pacific off Mexico. (NASA via AP)

Orion's last pass by the moon happened during an operation NASA describes as a "powered flyby burn." The three-and-a-half minute operation is designed to change the vehicle's velocity and set it on a course back to Earth.

One week earlier, Orion reached its farthest point in space – about 434,522 kilometers from Earth. That marked the midway point of the spacecraft's 25-day mission.

NASA administrator Bill Nelson looked forward to Orion's return to Earth in a statement. He said when the spacecraft re-enters Earth's atmosphere, "it will come back hotter and faster than ever before – the ultimate test before we put astronauts on board."

NASA has said Orion will be traveling at speeds up to 32,000 kilometers per hour while reentering Earth's atmosphere. This is much faster than spacecraft returning to Earth from the International Space Station.

The purpose of the Orion mission was to test the capsule, as well as NASA's huge Space Launch System (SLS) rocket used to carry it to space. The mission is part of the space agency's Artemis program, which aims to land Americans on the moon by the mid-2020s.

The latest mission was called Artemis I. Its goal is to prepare for Artemis II, which will include astronauts traveling inside Orion. If all goes well during that mission, NASA will launch Artemis III, with the goal of landing astronauts on the moon's surface.

While Orion has no astronauts on board, NASA placed three model humans, known as mannequins, on the spacecraft. The models are connected to a series of sensors designed to measure radiation and movements throughout the mission.

During a recent news briefing, NASA officials said they had been very satisfied with how Orion and its systems had performed during the mission. No major problems have been reported.

Mike Sarafin is the Mission Manager for Artemis I. He told the briefing, the mission was "going very well." He said because of this, NASA had been able to complete several mission objectives and was able to add some unplanned ones as well.

Sarafin said that by the time the mission ends, Orion will have traveled more than 2.2 million kilometers.

Debbie Korth is the deputy manager for the Orion program. She told reporters: "We couldn't be more pleased about how the spacecraft has been performing – really beyond all our expectations."

The last major test of the spacecraft will be to see how its heatshield performs during reentry. The heatshield will have to survive temperatures of around 2,800 degrees Celsius. That temperature is about half that of the surface of the sun.

A recovery mission has been organized to pick up the capsule from the Pacific Ocean. NASA's Landing and Recovery Director is Melissa Jones. She said her team of engineers and recovery specialists has worked with U.S. Navy divers attached to the USS Portland transport ship. The divers will help NASA bring in Orion after the spacecraft's splashdown near San Diego.

Korth said Orion represents the beginning "of a series of increasingly complex missions" yet to come in the Artemis program. She added that with the mission progressing so well, "we are really using this spacecraft to push the envelope and see what we can get in terms of performance" to prepare for future missions.

Bryan Lynn wrote this story for VOA Learning English, based on reports from NASA, The Associated Press, Reuters and Agence France-Presse.

velocity – n. the speed at which something moves

ultimate – adj. the best or greatest example of something

heatshield – n. a barrier of material designed to protect a spacecraft from heat during its reentry into an atmosphere

splashdown – n. a landing by a spacecraft in the ocean

push the envelope – idiom to behave in more extreme ways, or to try new things that have not been acceptable or attempted before