Update Required To play the media you will need to either update your browser to a recent version or update your Flash plugin.
By Alice Bryant
05 July 2021


Sinking land, a rising sea and other climate change effects have killed a wooded area in Louisiana where a Native American chief played as a child. In the nearby Mississippi River delta system, middle-school students can stand on islands that formed the same year they were born.

NASA is using methods like air-based technology and boats on islands in a five-year, $15 million study of these places. One area is connected to a river and growing; the other is disconnected and dying.

Scientists from NASA and six U.S. universities are aiming to create computer models that can be used with satellite data. Together, the information can show countries around the world which parts of their deltas are savable and which are past hope. 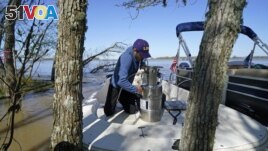 Andre Rabay, research scientist for the LSU Department of Oceanography and Coastal Science, prepares a canister of liquid nitrogen that he will use to freeze samples of the ground on Mike Island, part of the Wax Lake Delta in the Atchafalaya Basin, in St.

Marc Simard is lead scientist of NASA's Jet Propulsion Laboratory. He said if countries have to choose between saving one area or losing everything, it is good to know where their resources can help people.

Though oceans are rising because of climate change, the world's river deltas are sinking and getting smaller. Deltas produce much of the world's seafood and are home more than 300 million people.

To find out where to strengthen dying deltas, NASA is studying water flow in and out of two of Louisiana's river basins: the Atchafalaya and Terrebonne. They are examining the sediment, and plants that can slow sediment flow and pull carbon gases from the air.

The scientists are using two kinds of radar and a spectrometer device, which measures more colors than the human eye can see. High-technology NASA airplanes have been putting the instruments to work, collecting information on things like water height and the kinds and density of plants.

On boats and islands, scientists and students are measuring things like water currents and the width of trees. Their findings will be compared with those of the air-based instruments.

Robert Twilley is a professor of oceanography and coastal sciences at Louisiana State University, known as LSU. He told the Associated Press that one of the hardest parts of studying a delta is that you can only understand one small piece at a time. But working with NASA offers the ability to understand the whole delta, he said.

The Mississippi River collects 150 million tons of sediment each year. But, mainly because of flood-prevention systems, most sediment shoots into the Gulf of Mexico instead of staying in wetlands.

Older wetlands in areas surveyed by NASA's aircraft have more kinds of wildlife. And they have fertile soil from housing generations of plants. Along the nearby Hog Bayou area, for example, colorful birds fly through the trees. And in the very wet areas, osprey birds sit on top of cypress trees and alligators float in the water below.

But the Terrebonne Basin is different. It is shrinking so fast that the government is paying to move a group of Biloxi-Chitimacha-Choctaw Indians from their island to higher ground.

They are not the only group of Native Americans losing land to the changes.

"The wooded areas we used to run through as children -- they're dead," said Chief Shirell Parfait-Dardar. She is from the Grand Caillou/Dulac Band of Biloxi-Chitimacha Indians. Her community is based less than 80 kilometers from the Wax Lake Delta.

Dead forests are common in failing deltas where saltwater floods in as land sinks and erodes, LSU's Twilley said.

Louisiana is considering two projects that would move Atchafalaya River sediment to build land in the Terrebonne Basin. But a decision is more than a year away, says the state's coastal renewal agency.

In the Terrebonne Basin, sedimentation cannot keep up with sinking and sea level rise.

"All of the tools they're bringing to bear is really impressive," said Douglas Edmonds, a sediment expert with Indiana University. Although the scientist is not part of the project, he has worked with many of the researchers.

"The project itself is putting a finger on a really essential question for a lot of deltas around the world -- how this deltaic land is formed and what processes take it away," he said.

The Associated Press reported this story. Alice Bryant adapted it for Learning English. Caty Weaver was the editor.

delta – n. a piece of land shaped like a triangle that is formed when a river splits into smaller rivers before it flows into an ocean

basin – n. the area of land around a large river and the small rivers that flow into it

sediment – n. material (such as stones and sand) that is carried into water by water, wind, etc.

alligator – n. a large reptile that has a long body, thick skin, and sharp teeth, that lives in the tropical parts of the U.S. and China, and that is related to crocodiles

erode – v. to gradually be gradually destroyed by natural forces (such as water, wind, or ice)