Update Required To play the media you will need to either update your browser to a recent version or update your Flash plugin.
By Bryan Lynn
13 July 2022

NASA describes the Webb as "the largest and most powerful space science telescope ever built." The telescope is a joint partnership between NASA, the European Space Agency (ESA) and the Canadian Space Agency.

The orbiting observatory aims to build on the work of earlier telescopes, such as the Hubble and Spitzer. Both of those telescopes led to many discoveries and captured detailed and colorful images. But the Webb is designed to gather more in-depth data and explore parts of space never observed before. 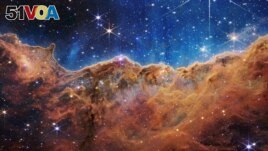 The new images showed parts of the universe observed by other telescopes in the past. But NASA officials said the Webb's power, distant position, and ability to observe infrared light brought more depth and detail to the images than ever before.

NASA praised the work of the Webb development team and said the telescope had begun "a new era in astronomy."

NASA Administrator Bill Nelson said the images demonstrated how the telescope will help "uncover the answers to questions we don't even yet know to ask." The head of the European Space Agency, Josef Aschbacher, said the new telescope had "really changed the understanding of our universe."

The Webb is a large infrared telescope, with a 6.5-meter mirror. Infrared waves are electromagnetic energy that cannot be seen with the human eye. The waves exist at a wavelength that is good for observing distant objects through gas and dust. The infrared system can also pick up light from more distant parts of the universe.

The telescope's large mirror and scientific instruments are protected by a thick cover. When fully open, the cover is about the size of a tennis court.

NASA officials say astronomers will use the telescope to further study the formation and development of stars, galaxies and exoplanets.

The $10 billion telescope was launched in December after years of delays and cost overruns. It took about a month to reach its orbiting position about 1.6 million kilometers away from Earth. In the months since then, NASA has been fully deploying and testing the telescope.

The first images were chosen by NASA to demonstrate the telescope's abilities and provide a look ahead to possible new science discoveries.

The image shown during an event at the White House was a "deep field" image of a distant galaxy cluster called SMACS 0723. NASA said the image provided the most detailed look yet at the early universe.

Among the other four images were two that showed huge clouds of gas and dust – called nebulas. The Carina Nebula is an area where stars are forming, and the Southern Ring Nebula surrounds a dying star. Each is thousands of light years away.

The collection also included new images of another galaxy cluster known as Stephan's Quintet, which was first discovered in 1877. The cluster includes several galaxies that NASA describes as "locked in a cosmic dance of repeated close encounters."

Another image showed a detailed examination of data on a large planet outside our solar system called WASP-96b. The telescope used its infrared equipment to look at the chemical makeup of the planet's atmosphere. NASA said it discovered the presence of water vapor in the atmosphere of an exoplanet for the first time.

Bryan Lynn wrote this story for VOA Learning English, based on reports from NASA, The Associated Press and Reuters.

era – n. a period of time in history that is known for a particular reason

mirror – n. a piece of glass with a shiny metallic material on one side that produces an image of anything that is in front of it

exoplanet – n. a planet orbiting a star that is not our sun

galaxy – n. a very large group of stars that make up the universe

cluster – n. a collection of stars or galaxies that appear close together in the sky and are gravitationally linked

encounter – n. a meeting, especially one that happens by chance