Update Required To play the media you will need to either update your browser to a recent version or update your Flash plugin.
By Dan Friedell
02 November 2021


Researchers have made a new discovery about a huge and long-lasting storm in the atmosphere of the planet Jupiter. 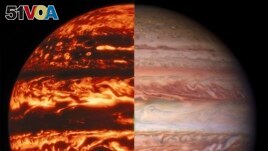 This combination of images provided by NASA on Thursday, Oct. 28, 2021 shows the planet Jupiter seen by the Juno probe's microwave radiometer, left, and in visible light, captured by the Gemini Observatory. (NASA/JPL-Caltech/SwRI/MSSS; Kevin M. Gill; Gemini Observatory via AP)

Scott Bolton of the Southwest Research Institute in Texas was the lead scientist in the study. He said microwave radiation and gravity-mapping tools from Juno show the storm "fades out" slowly and "keeps going down." He explained that the storm does not have a clear ending point below the clouds.

The planet is known for powerful storms in its atmosphere. Thousands of storms swirl around Jupiter at any time, scientists said. The storms cause the colorful cloud patterns shown by photography and mapping tools. Some of the tools produce images in three dimensions.

Bolton said the next project for Juno is to map the storms in the extreme north and south of the planet. They could be even deeper than the Great Red Spot.

Bolton said he did not want to guess that the Great Red Spot was the deepest of the planet's storms. He said, however, since the spot is the widest, it might also be the deepest.

The Juno spacecraft started orbiting Jupiter in 2016. NASA recently announced the project will be extended to 2025.

Dan Friedell adapted this story for Learning English based on a report by The Associated Press. Mario Ritter, Jr. was the editor.

What is your guess about what else NASA will discover about Jupiter? Tell us in the Comments Section and visit 51VOA.COM.

swirl – v. to move in circles or to cause such a motion

dimension – n. the length, width, height, or depth of something : a measurement in one direction (such as the distance from the ceiling to the floor in a room)