Update Required To play the media you will need to either update your browser to a recent version or update your Flash plugin.
By Bryan Lynn
15 January 2023


NASA's James Webb Space Telescope has made its first confirmation of an exoplanet. An exoplanet is a planet that orbits a star outside our solar system.

The American space agency says the exoplanet is almost exactly the same size as Earth.

Researchers from the Johns Hopkins University Applied Physics Laboratory in Maryland examined new data collected by the Webb to make the confirmation. 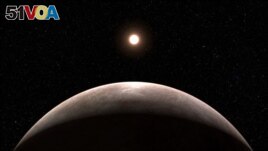 Past observations made by another NASA telescope provided some evidence that the exoplanet existed. But the Webb's confirmation made the discovery official.

The other space telescope is called the Transiting Exoplanet Survey Satellite, or TESS. TESS was launched in 2018 with the goal of discovering additional planets outside our solar system.

The exoplanet has been named LHS 475 b. The researchers said it is quite close to Earth for an exoplanet. It sits about 41 light-years away in the constellation Octans. A light-year is the distance light travels in one year.

Exoplanets are difficult for telescopes to identify. One reason is that bright light from the stars they orbit can hide them. The search process includes observing drops in the light level of stars. Such drops could be caused by a planet passing, or transiting, in front of a star.

Researchers said the Webb was able to confirm the existence of the exoplanet using the transiting observation method. They said the confirmation came quickly after just two transit events.

NASA has said the Webb telescope was developed to be able to provide a high level of detail in its observations. It is equipped with the latest technology to observe infrared waves. These waves are a kind of electromagnetic energy that cannot be seen with the human eye. NASA says the telescope's instruments can find infrared waves through gas and dust to observe distant objects.

Jacob Lustig-Yaeger helped lead the research. He said in a statement that the telescope data made it easy to make a clear confirmation. "There is no question that the planet is there."

The finding was recently presented at a conference of the American Astronomical Society in Seattle, Washington.

Another leader of the team, Kevin Stevenson, added that he found the confirmation "impressive" because the exoplanet is small and rocky, which makes identification more difficult.

Of all of NASA's operating telescopes, only the Webb is equipped to collect information on the atmospheres of exoplanets. But in this case, the researchers said they do not have enough data to confirm what kind of atmosphere LHS 475 b has.

Scientists generally use computer models and telescope data to study the atmospheres of exoplanets. Another member of the research team, Erin May, said the Webb telescope can easily identify a series of different molecules. "But we can't yet make any definitive conclusions about the planet's atmosphere," she added.

While the researchers said they cannot confirm what is present in the exoplanet's atmosphere, they are very sure about what is not present. For example, LHS 475 b cannot have a thick atmosphere that is mostly methane, Lustig-Yaeger said.

The team even noted it is possible that the exoplanet has no atmosphere at all. Some of the available data suggests the exoplanet may have an atmosphere of pure carbon dioxide. But the researchers said they plan to gather more data in future observations to help them learn about atmospheric conditions.

NASA says it has so far confirmed more than 5,000 exoplanets. But Lustig-Yaeger noted that the Webb telescope is much better equipped to discover small, rocky exoplanets. He said this will likely lead to a lot more exoplanet confirmations.

And, Lustig-Yaeger added, "We have barely begun scratching the surface of what their atmospheres might be like."

definitive – adj. clear and not likely to change

conclusion – n. an opinion reached after considering all information about something

scratch the surface – idiom. to deal with only a small part of a subject or problem