Update Required To play the media you will need to either update your browser to a recent version or update your Flash plugin.
By Bryan Lynn
04 August, 2019


Researchers say they have discovered the first nearby "super-Earth" planet that could possibly support life.

The discovery was made by a spacecraft designed to look for planets outside of our solar system. An international team of astronomers recently announced their findings in the publication Astronomy & Astrophysics.

The new discovery is known as an exoplanet, a planet that orbits a star outside of our own solar system. Exoplanets are not easy to identify with telescopes. This is because they are often hidden by the bright light of the stars they orbit.

In an effort to help discover such planets, NASA launched its Transiting Exoplanet Survey Satellite, or TESS, last year. TESS was designed to expand upon the work of previous exoplanet discoveries made with telescopes. More than 3,500 new exoplanets have been discovered over the past 20 years.

What is a super-Earth?

A super-Earth is a planet that has a mass between one and 10 times that of Earth. The team of astronomers says the newly-discovered exoplanet – called GJ 357 d - is about 31 light-years away from our solar system. The planet orbits a star named GJ 357.

NASA said in an announcement that the planet appears to orbit within its star's "habitable zone."

A leading member of the research team was Diana Kossakowski from the Max Planck Institute for Astronomy in Heidelberg, Germany. She said in a statement that GJ 357 d should be receiving about the same amount of energy from its star as Mars does from the sun.

"If the planet has a dense atmosphere, which will take future studies to determine, it could trap enough heat to warm the planet and allow liquid water on its surface," Kossakowski said.

NASA says the planet's mass is at least 6.1 times Earth's and it orbits its star every 55.7 days.

Lisa Kaltenegger is an associate professor at New York's Cornell University. She is also a member of the TESS science team. Kaltenegger called the new discovery "exciting." 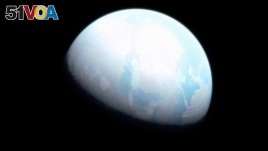 This illustration from NASA shows one interpretation of what GJ 357 d may be like. (Photo: NASA's Goddard Space Flight Center/Chris Smith)

"This is TESS's first discovery of a nearby super-Earth that could harbor life," she told the university's Cornell Chronicle. "TESS is a small, mighty mission with a huge reach," she said.

Kaltenegger added that the discovery will provide valuable information about this and other large exoplanets outside our solar system. "With a thick atmosphere, the planet GJ 357 d could maintain liquid water on its surface like Earth, and we could pick out signs of life with telescopes that will soon be online," she said.

NASA says TESS observed the GJ 357 star system last February. Researchers estimated the star is about one-third the mass of our sun. Several other exoplanets were discovered in the system after being caught by TESS cameras.

One of those exoplanets was identified as GJ 357 b, a planet 22 percent larger than Earth, the astronomers reported. It orbits 11 times closer to its star than Mercury does to our sun. GJ 357 b is thought to have surface temperatures up to 254 degrees Celsius.

GJ 357 b is considered a "hot Earth," said Enric Pallé, a lead member of the discovery team with the Institute of Astrophysics of the Canary Islands.

Pallé noted that the planet could not hold life. But it is "one of the best rocky planets we have for measuring the composition of any atmosphere it may possess," he added.

Jack Madden is a student at Cornell University who helped with the research on GJ 357. He says the new discoveries have opened the door for astronomers to test theories and models about exoplanets.

"We built the first models of what this new world could be like," Madden said. "Just knowing that liquid water could exist on the surface of this planet motivates scientists to find ways of detecting signs of life."

Bryan Lynn wrote this story for VOA Learning English, based on reports from NASA, Cornell University and the Institute of Astrophysics of the Canary Islands. Mario Ritter Jr. was the editor.

habitable – adj. able to be lived in

light-year –n. (unit of measure) the distance light travels in one year

determine – v. discover the facts or truth about something

harbor – v. to be the home or habitat of

composition – n. the parts that something consists of

possess – v. to have or own something

motivate – v. to cause someone to behave a particular way