Update Required To play the media you will need to either update your browser to a recent version or update your Flash plugin.
By Bryan Lynn
12 October 2022


The American space agency NASA says a recent experiment that crashed a spacecraft into an asteroid successfully changed the path of the orbiting object.

NASA announced the results on Tuesday. It said it was the first time that human action had changed the motion of a space object.

The operation was called the Double Asteroid Redirection Test, or DART. The DART spacecraft crashed into an asteroid called Dimorphos on September 26. Dimorphos is a small "moonlet" that orbits a larger asteroid named Didymos. The crash happened about 11 million kilometers from Earth. 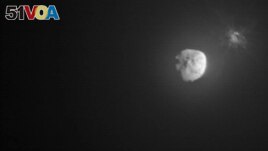 In this image made available by NASA, debris ejects from the asteroid Dimorphos, right, a few minutes after the intentional collision of NASA's Double Asteroid Redirection Test (DART) mission on Sept. 26, 2022, captured by the nearby Italian Space Agency'

The crash, or impact, was observed by powerful telescopes. The observations showed the impact created a crater in the asteroid. It also led to dust and rock flows that stretched several thousand kilometers.

The goal of the crash was to see how it might redirect the asteroid's path and speed. Before the impact, Dimorphos was completing one orbit around Didymos every 11 hours and 55 minutes. After the crash, the orbital period was reduced by 32 minutes, to 11 hours and 23 minutes.

Scientists involved in the project had predicted a reduction of 10 minutes, so they were pleased with the actual test results.

NASA described the crash as the world's first planetary defense test. But the asteroid targeted in the mission did not present any actual threat to Earth.

At a media event to announce the results, NASA Administrator Bill Nelson said, "This mission shows that NASA is trying to be ready for whatever the universe throws at us."

Lori Glaze is NASA's director of planetary science. She said, "Let's all just kind of take a moment to soak this in ... for the first time ever, humanity has changed the orbit" of an object in space.

NASA officials said four telescopes were involved in measuring the orbital period. All of them are in Chile and South Africa. Two American-based radar telescopes also helped confirm the results.

Former American astronaut Rusty Schweickart said he was "clearly delighted" by the results and the attention the mission has brought to asteroid redirection. Schweickart helped launch the nonprofit B612 Foundation, which seeks to develop tools and technologies to protect Earth from asteroid strikes.

NASA has said that no known asteroid larger than 140 meters in size has a reasonable chance of hitting Earth in the next 100 years. But scientists have predicted that in the very distant future, such a strike is possible.

For example, historical records of Earth's geology show that a nine-kilometer wide asteroid struck Earth about 66 million years ago. This huge explosion put the planet into a long winter and killed off nearly all dinosaur life.

NASA plans to launch a telescope in 2026 called the Near-Earth Object Surveyor. It will aim to better identify large asteroids and comets that could threaten Earth within 48 million kilometers.

Planetary defense experts say changing the motion of threatening near-Earth objects is less dangerous than blowing them up and creating additional pieces that could fall down on Earth. This is especially the case when objects can be identified years ahead.

Nancy Chabot is a planetary scientist with Johns Hopkins University's Applied Physics Laboratory in Maryland. She led the $325-million DART mission. Chabot said, "We really need to also have that warning time for a technique like this to be effective."

NASA's Glaze added, "You've got to know they're coming."

Bryan Lynn wrote this story for VOA Learning English, based on reports from The Associated Press, Reuters, Agence France-Presse and NASA.

crater – n. a big hole left in the ground or an object by a force of impact

mission – adj. a flight by an aircraft or spacecraft to perform a specific task

soak – v. to take in an amount of something

technique – n. a method for doing something