Update Required To play the media you will need to either update your browser to a recent version or update your Flash plugin.
By Bryan Lynn
10 November 2021


The American space agency NASA is seeking help from the public to identify important images captured by Mars explorers.

The project is designed to help teach an artificial intelligence, AI, system to recognize different scientific elements seen in the pictures.

Some of the images were captured by Perseverance, NASA's latest Mars rover, or explorer. Others came from the agency's Spirit and Opportunity rovers.

AI plays an important part in NASA's efforts to process data collected by its spacecraft and exploring vehicles. The space agency develops AI algorithms to identify and group elements of scientific interest. But the algorithms must be trained by humans in order for them to work. 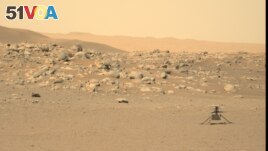 This file photo, captured by NASA's Perseverance rover, shows the Ingenuity helicopter on the surface of Mars. The image was received on June 15, 2021. (Credit: NASA/JPL-Caltech/ASU)

That is where private citizens can help.

NASA says Perseverance can send hundreds of images to Earth on any given day. Scientists and engineers examine the images as they search for different geological qualities of the surface of Mars.

These images can also help guide Perseverance and other rovers operating on Mars. But the team on Earth faces a very short timeline. NASA said in a recent statement, "After those images travel millions of miles from Mars to Earth, the team members have a matter of hours to develop the next set of instructions."

Those instructions -- based on what the NASA team sees in the images -- must then be sent back to Perseverance.

Vivian Sun is a scientist at NASA's Jet Propulsion Laboratory (JPL) in California. She helps oversee the daily operations of Perseverance. She also advises those who run the public project, called AI4Mars.

"It's not possible for any one scientist to look at all the downlinked images with scrutiny in such a short amount of time, every single day," Sun said in an online statement. "It would save us time if there was an algorithm that could say, ‘I think I saw rock veins or nodules over here,' and then the science team can look at those areas with more detail."

The AI4Mars project aims to build a large, solid set of data created from thousands of images. Researchers can use these images to quickly discover interesting geological features.

It is much easier for other AI researchers to train their algorithms on available pictures of many earthly things. But NASA did not have such a massive collection of Mars images to work with.

Citizen scientists who wish to take part in the AI4Mars project can visit a special website to start. There, users will find an online tool that can be used to make lines around features in the images such as sand and different kinds of rock.

Once these features are marked, a user can choose from descriptions that fit what is in the images. NASA says the latest version of the AI4Mars system lets people choose more detailed descriptions.

Annie Didier is a JPL scientist who works on the Perseverance version of AI4Mars. She said creating a strong dataset can serve several important purposes. "With this algorithm, the rover could automatically select science targets to drive to," she said. It could also permit rovers on Mars to store numerous images and then send back only the ones that scientists are interested in, she added.

NASA says AI4Mars is the continuation of another project launched last year that used images collected by the Curiosity rover. In that project, people were able to outline and mark features like sand and rock from nearly half a million images.

The result of that effort was an algorithm called Soil Property and Object Classification. NASA says that system can correctly identify the features it was trained on about 98 percent of the time.

Bryan Lynn wrote this story for VOA Learning English, based on reports from NASA. Ashley Thompson was the editor.

vein – n. a narrow water channel in rock or earth

nodule – n. a small, rounded piece of matter that is different from its surroundings

automatic – adj. something controlled using machines and not people

timeline – n. a line that shows the time and order of the way things happened

outline – v. to draw, trace, or define the outer edge or shape of something