Update Required To play the media you will need to either update your browser to a recent version or update your Flash plugin.
By Jim Dresbach
25 August, 2016


The American space agency, NASA says it has again made contact with a spacecraft studying the sun and space weather.

NASA said it lost contact with the Solar Terrestrial Relations Observatories, also known as the STEREO-B spacecraft, two years ago.

Communications with the spacecraft were lost after NASA attempted to try to prevent overheating of the spaceship's antenna. 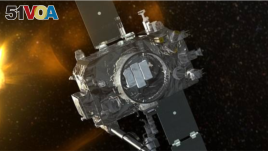 After two years of silence, NASA says it has reconnected with the lost space probe, STEREO-B.

NASA has another spacecraft that is nearly identical to STEREO-B called STEREO-A. It also was launched in 2006 to study the sun and space weather. STEREO-A is working normally.

NASA said it will now test STEREO-B to see if the spacecraft's instruments and sensors are operating correctly.

Both spacecraft are located on the other side of the sun from earth.

NASA says they have added to the understanding of how the sun works. The ships have studied the sun's gasses, wind, particles and its atmosphere.

antenna – n. a device such as a wire or a metal rod for sending or receiving radio or television signals

sensors –n. a device that detects or senses heat, light, sound or motion and then reacts to it in a particular way