Update Required To play the media you will need to either update your browser to a recent version or update your Flash plugin.
By Bryan Lynn
19 December 2021


The American space agency NASA is preparing to launch a new telescope designed to explore parts of space never observed before.

The James Webb Space Telescope enters a new launch window on December 24. The mission has already been delayed many times in recent years. The telescope is named after NASA's second administrator, who led the agency from 1961 to 1968.

The orbiting observatory is set to launch on an Ariane 5 rocket from French Guiana in South America. The mission is a joint project between NASA, the European Space Agency (ESA) and the Canadian Space Agency. 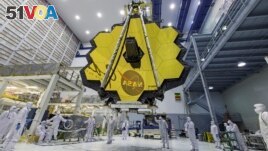 In this April 13, 2017 photo provided by NASA, technicians lift the mirror of the James Webb Space Telescope using a crane at the Goddard Space Flight Center in Greenbelt, Md. (Laura Betz/NASA via AP)

The James Webb is considered NASA's new generation telescope after the Hubble and Spitzer space telescopes. Hubble was launched more than 30 years ago and Spitzer was deployed in 2003. Both of those telescopes led to numerous discoveries and provided more detailed, colorful space images than ever before.

But NASA says the James Webb "is the largest and most powerful space science telescope ever built." It is meant to build on the discoveries of the other telescopes, while gathering more in-depth data on the early development of the universe.

The James Webb is a large infrared telescope, with a nearly seven-meter mirror for exploring space. Infrared waves are a kind of electromagnetic energy that cannot be seen with the human eye. But they exist at a wavelength that is good for observing distant objects through gas and dust in space.

The whole telescope is designed to collapse inside the launch vehicle and open back up in space. The telescope's mirror and scientific instruments are protected by a thick, sun shield. When fully open, the shield is about the size of a tennis court.

The James Webb will travel to an orbit about 1.6 kilometers away from Earth. It will then complete a six-month "commissioning" period in space. It is during this time that the telescope will open its mirror, sun shield and other small systems.

NASA engineers say this period will be the most difficult for the telescope. This is because of its massive size, the complex opening method and the extremely cold temperatures in space.

Eric Smith is the telescope's program director and a program scientist. "I like to think of (the telescope) as NASA's vehicle for the deepest space exploration that humanity can do," he told The Associated Press. "It will allow us to see farther back in time, to the time when the very first stars and galaxies were being born."

Smith added that the telescope's infrared abilities will also permit it "to peer through clouds of gas and dust in our own galaxy, where stars and planets are being born today."

NASA says the telescope aims to help scientists learn about all periods of the universe's history dating back to just after the Big Bang event, about 13.8 billion years ago. It is also designed to study exoplanets - planets that orbit stars other than the sun.

John Mather is a project scientist for the mission at NASA's Goddard Space Flight Center in Maryland. "We're going to look at everything there is in the universe that we can see," he told Reuters news agency. "We want to know: how did we get here from the Big Bang, how did that work? So, we'll look."

Klaus Pontoppidan is a project scientist at the Space Telescope Science Institute in Baltimore, Maryland. He says the James Webb is powerful enough to uncover the unexpected.

"We can plan what we think we're going to see," he said, adding, "But at the end of the day, we know that nature will surprise us more often than not."

Bryan Lynn wrote this story, based on reports from The Associated Press, Reuters and NASA. Caty Weaver was the editor.

shield – n. a piece of equipment used to protect something from dangerous or unpleasant things

commission – v. to arrange for someone to do a piece of work

galaxies – n. any one of a very large group of stars that make up the universe

peer – v. to look at or examine