NASA to Study Water around the World from Space

Update Required To play the media you will need to either update your browser to a recent version or update your Flash plugin.
By Dan Novak
16 December 2022


A NASA-led international mission launched a radar satellite from southern California early on Friday. The satellite will be involved in a major project to research the world's oceans, lakes and rivers.

The satellite is called SWOT, short for Surface Water and Ocean Topography. It is designed to give scientists a never-before-seen view of Earth's water, which covers 70 percent of the planet.

About the size of a car, the satellite uses advanced microwave radar technology to collect detailed height and surface measurements of all bodies of water. The data will provide researchers with more information on the effects of climate change. 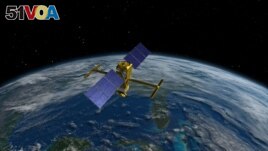 The advanced radar SWOT satellite, short for Surface Water and Ocean Topography and designed and built at NASA's Jet Propulsion Laboratory (JPL) near Los Angeles, is seen in an artist's rendition created in February 2015.

Data will be taken from radar readings of the planet at least two times every 21 days. The information will help study ocean currents, predict the weather, and control freshwater supplies in areas with little rain, researchers said.

The satellite took nearly 20 years to develop by NASA along with the French and Canadian space agencies. It was designed and built at NASA's Jet Propulsion Laboratory (JPL) near Los Angeles.

"It's really the first mission to observe nearly all water on the planet's surface," said JPL scientist Ben Hamlington.

One major goal of the mission is to research how oceans absorb atmospheric heat and carbon dioxide - the natural process that moderates temperatures and climate change.

SWOT is designed to measure small differences in surface heights around smaller currents, where much of the oceans' reduction of heat and carbon is believed to happen. And SWOT can do so with 10 times greater detail than existing technologies, JPL says.

The world's oceans are estimated to have absorbed more than 90 percent of the extra heat trapped in the Earth's atmosphere by human-caused greenhouse gas emissions.

Studying how that happens will help climate scientists answer an important question: "What is the turning point at which oceans start releasing, rather than absorbing, huge amounts of heat back into the atmosphere...?" said Nadya Vinogradova Shiffer. She is SWOT's program scientist at NASA in Washington.

The satellite will also be used to study the effect of rising ocean levels. And it will be able to measure all rivers wider than 100 meters, as well as more than 1 million lakes and bodies of water larger than 6.25 hectares.

SWOT's radar instrument can also read through cloud cover and darkness over wide areas of the Earth. This permits scientists to accurately map their observations no matter the weather or time of day and to cover large areas far more quickly than before.

absorb — v. to take in in a natural or gradual way

greenhouse gas — n. gas that cause the warming of the earth's atmosphere

emission — n. the act of producing or sending out something

pulse — n. the regular movement of blood through your body that is caused by the beating of your heart and that can be felt by touching certain parts of your body