Update Required To play the media you will need to either update your browser to a recent version or update your Flash plugin.
By Caty Weaver
06 May 2020


Musetta Vander has been to several of the most famous national parks in the United States. She has captured images of herself doing yoga among the Joshua trees, driving on a tree-lined road in Yosemite with the huge rock formations behind her and sitting on a cliff hundreds of meters above a bend in the Colorado River.

"Sometimes it's so beautiful you want to share it with the world immediately," said Vander, who lives in West Hollywood, California. "However, I feel that you miss out on the magical experience nature provides you when you don't let go of social media..."

Vander's comments demonstrate a long-running debate about how much national park visitors should be connected to the internet. Park administrators are seeking the best way to expand service without interfering in the peace found in natural settings.

Right now, the parks are closed because of the coronavirus spread. But national park officials are firm about their plans to settle the connectivity issue as states start easing restrictions.

"We are doing our best to maintain as many project timelines as possible," park service spokeswoman Vanessa Lacayo said.

The coronavirus shows the need for better internet service as more people work from home, said Christine Gale Reynolds. She lives in Yosemite Village within the park. The current equipment there is not able to meet needs during the summer, when many visitors come to the park.

"When my community expands to include a lot of tourists and travelers, it's very competitive to get on the Wi-Fi..." she said.

Kam Redlawsk points to internet service as a safety measure. She and her husband got lost visiting the federally managed Trona Pinnacles, an area with massive rock structures in the central California desert. They could not get wireless phone service.

"Access should be an equal right, especially in times of crises," she said.

Luckily, they found a path out of the wilderness without internet access.

At the Grand Canyon, park officials are deciding where to put the tall metal structures – called towers – needed for phone service. Some already can be seen in popular tourist areas. Others can be seen through the park's trees.

A proposal calls for adding up to five towers, none of them below the edge of the canyon. Officials may also consider new equipment case-by-case. They are to decide later this year.

The Grand Canyon gets more than 6 million visitors a year. In a large survey from 2016, 83 percent of visitors said using electronic devices was at least a little important to their stay in the park.

Elly Boerk is an environmental protection specialist at the Grand Canyon. She said officials know people depend on wireless phones and other devices for directions, guest services and more. That expectation is reasonable, she suggested.

But a group of Grand Canyon river guides supports keeping the backcountry, or more wild areas, free of cellphone service.

Improving communications equipment could help in emergencies and with traffic cameras, electronic message boards and visitor records, said park official Lacayo. And younger visitors -- many of whom grew up with cellphones -- want the connection, she added.

Most parks communication improvement plans center on developed areas. The plans also seek to hide towers among trees or other landscapes. 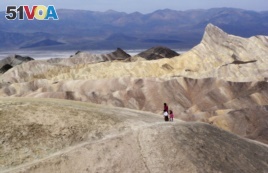 Officials at Death Valley National Park along the California-Nevada border approved a plan last year to build a new cell tower. However, that plan is on hold until communications company AT&T makes changes to the proposal to meet environmental requirements.

Grand Teton National Park in Wyoming has approved a plan for 100 kilometers of new underground communications wires. The labor is to begin this summer. The park is also considering a proposal for a cell tower.

Yellowstone National Park is considering a permit to add devices on existing equipment to increase Wi-Fi speeds near guest and employee housing.

"The interior of Yellowstone has been starved for bandwidth," said Bret De Young, branch chief of technology.

At Bryce Canyon National Park in Utah, officials are considering a request from the communications company Verizon. It has asked to put up an 18-meter-tall cell tower on high ground near a canyon of red rock formations.

The number of visitors to the park has more than doubled in the past 10 years. The park depends on social media to warn visitors about dangerous conditions, such as flash floods in narrow canyons. But tourists can only receive the messages in a few places with Wi-Fi and cell signals. Many of those places are outside Bryce Canyon's park borders.

maintain -v. to continue having or doing (something)

tourist -n. a person who travels to a place for pleasure

access -n. a way of being able to use or get something

survey -n. an activity in which many people are asked a question or a series of questions in order to gather information about what most people do or think about something