Update Required To play the media you will need to either update your browser to a recent version or update your Flash plugin.
By Phil Dierking
27 August, 2017


Native American tribes want to begin growing and selling marijuana. They hope it will help end poverty on reservations, the large areas where many Native Americans live. However, there is uncertainty about the future of US marijuana policy.

Cannabis is the plant that produces marijuana. The growth and sale of marijuana in some states has become a big business. Arcview is a cannabis investor network in California. It says the U.S. marijuana market earned $6.7 billion in 2016.

Supporters of cannabis say it has many uses. The male cannabis plant can be used to make hemp, which is used around the world in more than 25,000 products. These include food, fabric and medicine.

Leslie Bocskor is the founder of Electrum Partners, which helps states and Native American tribes enter the marijuana business.

He said hemp can be used to create plastics that are more environmentally friendly than those made from oil and gas, which are not biodegradable. Bocskor says when hemp is put into a landfill it will degrade and not cause damage to the environment. He said the creation of plastic products causes more pollution than the making of products from hemp.

However, Native American tribes and the companies they own do not pay federal income taxes on money earned on reservations.

Bocskor says this means that a tribe-owned cannabis company could earn a profit margin of up to 85 percent. 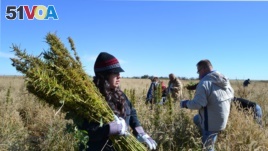 In this Oct. 5, 2013 photo, volunteers harvest hemp at a farm in Springfield, Colo. during the first known harvest of industrial hemp in the U.S. since the 1950s. America is one of hemp's fastest-growing markets, with imports largely coming from China and

The Controlled Substances Act of 1970 bans the growth, sale and use of marijuana and other drugs. But the law has not stopped states from legalizing marijuana. In 1996, California became the first state to legalize marijuana for medical uses. Since then, other states have done so. Some states have also legalized the recreational use of marijuana.

In a document released in 2013, the United States Department of Justice said states could give their citizens the right to grow and sell marijuana. The department said people would not be arrested for doing so. There were some restrictions. For example, states could not permit cannabis to be grown on public land. They could not permit the sale of marijuana to young people, or let it be sold in states where it was still illegal. The department wrote similar rules for tribal governments a few months later.

Vincent Sliwoski is a lawyer in Portland, Oregon. Some of his clients are cannabis companies. He teaches cannabis law. He says the Justice Department document means the federal government does not want to spend money enforcing marijuana laws. But he says the Trump administration could change that policy.

Twenty-nine states and Washington, DC have legalized some form of marijuana use. Several tribes have tried to enter the marijuana business, but most have been stopped by the federal government.

Some Native Americans are operating successful marijuana businesses, including the Squaxin Island Tribe in Washington State. Others have banned marijuana, like the Oglala Sioux in South Dakota.

In July 2015, government agents raided two reservations in northern California. They said the tribes were producing a greater amount of marijuana than is permitted. The tribes denied the accusations.

Three months later, federal agents took hemp plants from the Menominee Nation in the upper-Midwestern state of Wisconsin. The agents said people who were not Native Americans were operating the tribe's cannabis business. The agents also said that the tribe was producing plants with higher levels of THC than permitted. THC is a part of the cannabis plant that gives marijuana its psychoactive effects.

The Menominee tribe said it had asked the government to test the plants and had said it would destroy any plants that had levels of THC higher than permitted.

After these raids, the Flandreau Santee Sioux tribe in South Dakota burned its crop and closed its cannabis-growing operations. The tribe feared it would also be raided.

It is not clear why some federal agents have raided some tribal marijuana operations. Sliwoski said it is possible that some police agencies do not understand the 2013 Department of Justice document, or are targeting Native American tribes.

Leslie Bocskor believes banning the medical and recreational use of marijuana would be very unpopular. He does not believe the federal government will take any action limiting the uses of the drug. And he notes that marijuana sales have brought a lot of money to some states. More than $500 million in taxes have been paid in Colorado by the marijuana industry since voters decided to legalize the drug in 2014.

Cecily Hilleary reported this story from Washington. Phil Dierking adapted it for VOA Learning English. Christopher Jones-Cruise was the editor.

Do you think marijuana should be legal or illegal? Why? We want to hear from you. Write to us in the Comments Section or on 51VOA.COM.

biodegradable - adj. capable of being slowly destroyed and broken down into very small parts by natural processes, bacteria, etc.

cannabis - n. a drug (such as marijuana or hashish) that comes from the hemp plant and is smoked illegally

deduct - v. to take away (something, especially an amount of money) from a total

landfill - n. a system in which waste materials are buried under the ground

marijuana – n. the dried leaves and flowers of the hemp plant that are smoked as a drug

profit margin – n. the difference between the cost of buying or making something and the price at which it is sold

reservation – n. an area of land in the U.S. that is kept separate as a place for Native Americans to live