Update Required To play the media you will need to either update your browser to a recent version or update your Flash plugin.
By Phil Dierking
25 June, 2017


Native Americans are questioning the leading theory of how the first peoples in North America arrived on the continent.

For years, scientists have been debating where the first Native Americans came from, and when they arrived in North America.

The scientific community generally agrees that a single wave of people crossed a land bridge connecting Siberia and Alaska around 13,000 years ago.

This theory is called the Bering Strait Theory, named after the waterway between eastern Russia and western Alaska. Yet some Native Americans feel that theory is too simple and culturally biased.

Theories from the religion before science.

The first European explorers to arrive in the Americas did not use science to explain the people they found. The explorers instead looked to the Bible. Christianity's holy book suggested that human beings were created around 4,000 years ago. Biblical tradition holds that all humans are related to the first man, Adam. That would including native peoples whom Europeans considered as primitive or simplistic.

"Dominant science believed in a concept of superiority," said Alexander Ewen. "And that created an idea that either people were genetically inferior or that there were stages of civilization, and Indians were at a lower stage," he said.

Ewen is a member of the Purepecha Nation. He wrote a book called the "Encyclopedia of the American Indian in the Twentieth Century."

Early scientists felt the "primitives" they discovered in the Americas did not have the technology to have sailed the oceans. So they decided that Indians had reached North America by some unknown land bridge. They found their answer in the Bering Strait.

Ewen says that scientific theory has lasted to this day, even with new discoveries and technology. Yet new findings suggest that Indians arrived much earlier and by using different methods. 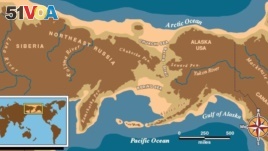 Map of eastern Russian and Alaska with a light brown boarder depicting Beringia, where archaeologists believe ancient Americans crossed from Siberia into Alaska around 13,000 years ago. (U.S. National Park Service)

"In the first place, it's simplistic," said Ewen. "The people in this hemisphere were, and are, extremely diverse, more than any other place in the world."

In the 1930s, scientists studied a number of bones from ancient mammoths. The bones were discovered in the American community of Clovis, New Mexico. Among them were several unusual spear points, which the scientists named "Clovis points."

Since then, tens of thousands of the Clovis points have been found across North America. Some have even been found in South America, as far south as Venezuela.

Additional discoveries in the 1970s led some scientists to push back the arrival date. Archaeologist James Adovasio dated artifacts found in Pennsylvania's Meadowcroft rock shelter to be up to 16,000 years old. But other scientists criticized the methods he used to arrive at that date.

All fields of science are in the debate

Other scientists have expressed their ideas on the subject. In 1998, University of California-Berkeley linguist Johanna Nichols argued that it would have taken up to 50,000 years for a single language to split into the many languages spoken by modern Native Americans. This theory meant that America's first peoples would have arrived closer to 19,000 years ago.

Geologists have said that it would not have been possible to cross the Bering Strait by land until 10,000 or 12,000 years ago. This led to theories that early humans might have sailed down the Pacific coast into the New World.

In 2015, a Harvard University geneticist, Pontus Skoglund, noted genetic links between Amazon Indians and the native peoples of Australia and New Guinea.

Yet a Smithsonian Institution anthropologist was criticized for suggesting Stone Age Europeans sailed across the Atlantic thousands of years before Christopher Columbus.

In April of 2017, researchers in California studied crushed bones they say came from an ancient Mastodon. Mastodons are no longer alive, and were related to modern elephants. The researchers think the creature they studied was killed by humans 130,000 years ago. However most scientists reject this theory because the findings cannot be confirmed.

Some Native American tribes have their own beliefs of how their people came to the continent.

Montana's Blackfoot tradition says that the first Indians lived on the other side of the ocean, but their creator decided to take them to a better place. "So he brought them over the ice to the far north," the story says.

The Hopi people of Arizona say their ancestors had to travel through three worlds before they finally crossed the ocean going east to a final new world.

And Oklahoma's Tuskagee people believe the "Great Spirit" chose them to be the first people to live on the earth.

However, few scientists seem to take those beliefs seriously. Joe Watkins, supervisory anthropologist at the U.S. National Park Service, says scientists are uneasy about the time references and possibility for more than one explanation.

Yet he does not feel the beliefs should be dismissed completely.

"...I do believe most of them carry within them kernels of truth of use to researchers," he adds.

­­­­­­­­­­­­Cecily Hilleary reported this story for VOANews. Phil Dierking adapted her report for Learning English. George Grow was the editor.

How do you think the first people came to the Americas? We want to hear from you. Write to us in the Comments Section or on 51VOA.COM.

artifact - n. a simple object (such as a tool or weapon) that was made by people in the past.

geologist - n. a science that studies rocks, layers of soil, etc., in order to learn about the history of the Earth and its life

kernel - n. the small, somewhat soft part inside a seed or nut

linguist - n. a person who studies the science of languages

reference - n. the act of referring to something or someone