Update Required To play the media you will need to either update your browser to a recent version or update your Flash plugin.
By Bryan Lynn
05 July 2022


NATO's 30 members have signed an agreement that permits Sweden and Finland to join the military alliance.

The agreement was signed Tuesday during a NATO meeting in Brussels. The action came after NATO representatives meeting last week in Spain officially invited Sweden and Finland to join.

The legislatures in all alliance nations must approve the agreement before Sweden and Finland can be fully admitted into NATO. That process is expected to take up to a year. 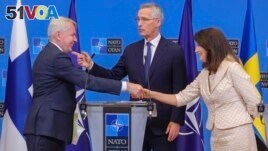 Sweden and Finland, however, will be able to take part in NATO meetings and will be given greater access to NATO intelligence information.

NATO Secretary-General Jens Stoltenberg called the signing "truly a historic moment." He added, "With 32 nations around the table, we will be even stronger."

The move further separates Russia from Europe after its invasion of neighboring Ukraine in February. Russia had repeatedly warned both countries against joining NATO. On March 12, Russia's foreign ministry said if the move went forward, "there will be serious military and political consequences."

Stoltenberg urged lawmakers in allied countries to quickly approve, or ratify, the agreement. "The security of Finland and Sweden is important for our alliance, including during the ratification process," he said.

Experts say getting parliamentary approval in Turkey could be problematic, although Sweden, Finland and Turkey held talks on the matter last week in Spain.

Turkish President Recep Tayyip Erdogan has warned that Turkish legislators could block the process. The lawmakers are concerned about how Sweden and Finland will deal with Turkish demands to extradite people it considers terror suspects.

Erdogan said this issue could lead Turkey's parliament to refuse to ratify the agreement. For the agreement to go into effect, all 30 member states must ratify it.

Stoltenberg said he does not expect Turkey to reject the deal. "There were security concerns that needed to be addressed. And we did what we always do at NATO. We found common ground," he said.

consequence – n. the result of an action or situation

extradite – v. to send a person who has been accused of a crime to another state or country for trial