Update Required To play the media you will need to either update your browser to a recent version or update your Flash plugin.
By Bryan Lynn
15 November 2021


NATO Secretary-General Jens Stoltenberg has urged Russia to be more open about its military activities near Ukraine.

Ukraine claims Russia kept tens of thousands of troops and equipment near their common border after completing military exercises earlier this year.

"We call on Russia to be transparent about its military activities," Stoltenberg told reporters Monday after talks in Belgium with Ukrainian Foreign Minister Dmytro Kuleba. "It is important to prevent escalations and reduce tensions," the NATO chief added. 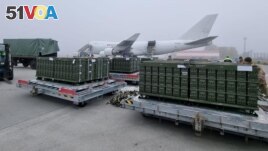 Workers and Ukrainian servicemen unload a shipment of ammunition delivered as part of U.S. security assistance to Ukraine, at the Boryspil International Airport outside Kyiv, Ukraine November 14, 2021. (Press service of the U.S. Embassy in Ukraine/Handout

Asked whether he feared a possible invasion of Russia into Ukraine, he said: "what we see is a significant, large Russian military build-up."

Kuleba called on NATO for help to strengthen Ukraine. He added that his country needed to prepare for all possible situations.

Russia annexed Ukraine's Crimean Peninsula in 2014 and supported a separatist movement that broke out that year in eastern Ukraine. Ukraine's defense ministry has said about 90,000 Russian troops are stationed not far from their border and in rebel-controlled areas in Ukraine's east.

After talks with Ukraine's Kuleba in Washington on Friday, Blinken said the U.S. is not sure of Russia's plans. But he added: "From what they've done in the past, we have real concerns about what we're seeing in the present." Blinken said the United States is committed to supporting Ukraine's security and territorial independence.

Last week, a Russian government spokesman dismissed Western media reports suggesting that Russia may be planning to invade Ukraine. "Russia doesn't threaten anyone," government spokesman Dmitry Peskov said. "The movement of troops on our territory shouldn't be a cause for anyone's concern," he added.

Reuters and The Associated Press reported on this story. Bryan Lynn adapted the reports for VOA Learning English. Ashley Thompson was the editor.

transparent – adj. being open and honest about something

escalation – n. when a violent or bad situation becomes worse or more serious

concentration – n. a large number or amount of something in the same place

conduct – v. to organize or do something

annex – v. to start to control or rule an area of another country