Update Required To play the media you will need to either update your browser to a recent version or update your Flash plugin.
By VOA
22 October, 2015


NATO launched its largest military exercise in more than a decade this week.

The exercise is called "Trident Juncture" and brings 36,000 troops together from more than 30 nations. It takes place in Italy, Spain and Portugal and lasts for three weeks. 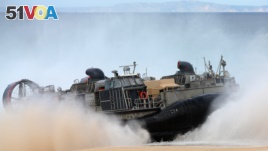 A US Navy hovercraft approaches the beach at the beginning of the NATO Trident Juncture exercise 2015 at Raposa Media beach in Pinheiro da Cruz, south of Lisbon, Oct. 20, 2015.

NATO could be asked to intervene in conflict zones like the Middle East, North Africa, Syria and Ukraine.

Vershbow says the alliance needs to be ready and flexible.

"We are very concerned about the Russian military build-up," Vershbow said.

The exercises were planned two years ago. They will test a force of 5,000 troops from air, maritime and special operations units.

Officials have made up a scenario for the troops: They will protect a state and its seas under threat, according to a Reuters report.

adversary – n. an enemy or opponent

authorize – v. to give power or permission to (someone or something)
confrontation – n. a situation in which people, groups, etc., fight, oppose, or challenge each other in an angry way

deputy – n. an important assistant who helps the leader of a government, organization, etc.