NATO Needed Now More Than Ever

Update Required To play the media you will need to either update your browser to a recent version or update your Flash plugin.
By VOA
24 June, 2014

The North Atlantic Treaty Organization may be getting stronger because of conflicts on NATO's eastern and southern borders.

That is the sound of armored personnel carriers, tanks and other military equipment being put on trucks in Afghanistan. They are being prepared for the long ride home as NATO's campaigns in the country come to an end.

Some observers believed the alliance will become less important after the operation ends. But Jonathan Eyal of the Royal United Services Institute says they were wrong. 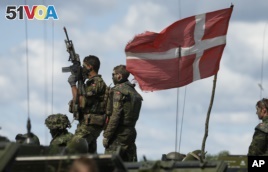 Danish soldiers participate in the annual multinational NATO exercise in the Baltic states on June 17, 2014.
"Interestingly, NATO is now more relevant than it has been for probably a decade."

He says the alliance is still important largely because of Russia. NATO officials recently released satellite images of what appears to be tanks crossing from Russia into eastern Ukraine. This followed Russian expressions of support for Ukrainian separatists, and Russia's takeover of the Crimean peninsula.

Professor Eyal says European countries once under the control of the Soviet Union are now worried about Russia.

"The east Europeans used to be dismissed up to now as being neurotic, as being too frightened about Russia that supposedly is no longer an enemy. Well, the east Europeans were right and we were wrong about Russia. So in many respects this is the moment where the alliance will have to reassure its members."

NATO has taken steps to calm the former Soviet-controlled states. It has increased the number of troops along the borders of its members in the east. It has also increased sea and air defenses. Military exercises took place earlier this month in Lithuania.
Professor Eyal says not everyone in Europe agrees on how to deal with Russia.

"Countries like Germany, or France, or the UK -- who believe that we should not make too much out of the current Ukrainian crisis -- and countries such as Poland or Romania -- the big former Communist countries on the borders with Ukraine -- who believe that Ukraine is a sign of a fundamentally-different Europe from the one that we knew."

Russia began working closely with NATO in the 1990s. But military experts say it should no longer be considered a strategic, or long-term, partner.

General Philip Breedlove is the Supreme Allied Commander of NATO operations in Europe. He says the alliance may make changes in how its troops are deployed.

"We've seen a nation cross an internationally-recognized sovereign border, and annex by force a portion of a sovereign nation. That changes the way we do business. And so we are now re-evaluating how we do these things as it relates to force readiness, responsiveness and positioning."

Jonathan Eyal says NATO must also deal with unrest along its southern borders.
"Turkey, for instance, asked for a NATO meeting to discuss the crisis it sees at its borders."

That crisis in Syria and Iraq is worsening. Islamist militants have taken control of large areas in each country.

NATO's secretary general has said he does not believe the alliance should become involved in the Iraqi conflict. But security officials in Western countries warn that the lawlessness there enables terrorists to operate safely. The officials warn that these terrorists may use Iraq as a base for attacks on other countries. So, they say, NATO should watch the situation closely.

A report written for NATO on the organization's future said it should re-state its top objective -- collective defense. And it said European members should halt cuts in defense spending. I'm Christopher Cruise.

This report was based on a story from VOA's Henry Ridgwell in London.
Related Articles
go top