Update Required To play the media you will need to either update your browser to a recent version or update your Flash plugin.
By Christopher Jones-Cruise
02 October, 2016


NATO commanders are calling on Western nations to expand efforts against the ‘information war' being spread by opponents of the West.

The commanders warn that countries like Russia are using the free press in democratic countries to spread disinformation.

The term "hybrid warfare" is often used to describe the deployment of disinformation and military power at the same time. An example is the Russian takeover of Crimea from Ukraine in 2014. 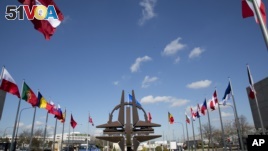 FILE - NATO symbol and flags of the NATO nations outside NATO headquarters in Brussels.

Two years ago, gunmen launched raids on Ukrainian military bases in the area. At first, the Russian government denied the gunmen belonged to the Russian military. Yet similar unidentified armed groups appeared in eastern Ukraine a few weeks later. That conflict, between Russia-supported rebels and the Ukrainian military, is continuing.

Janis Sarts is the director of the North Atlantic Treaty Organization's STRATCOM Center of Excellence. She said the West is playing catch-up to the disinformation campaigns.

Representatives of Western countries recently met to discuss the growing influence of Russian state media, including its 24-hour Russia Today or RT. The television station is often accused of broadcasting propaganda for Russia.

Edward Lucas works for The Economist magazine. He says TV stations like RT should not be considered journalism. He says Russia lies about events. He says Western media prioritizes "fairness over truth."

Lucas says the West must be more active on social media.

"There's a real problem with comment fields, and with fake social media accounts, particularly on Twitter. The Russians are putting lots and lots of money into creating tens of thousands of trolls."

NATO officials said Russia believes control of information is an important part of its conflict planning. They said Western nations use separate public relations teams to provide information during conflicts.

Correspondent Henry Ridgwell reported this story from London for VOANews. Christopher Jones-Cruise adapted it for Special English. George Grow was the editor.

hybrid warfare – n. a combination of conventional weapons, irregular tactics, disinformation, terrorism and criminal behavior used in the same time and battlespace to reach a group's military and political goals

coercion – n. the act of making someone do something by using force or threats

journalism – n. the activity or job of collecting, writing and editing news stories for newspapers, magazines, television, radio or the internet

troll – n. a person who tries to cause problems on an Internet message board, in comments sections of websites or on social media sites like Twitter and Facebook by posting messages that cause other people to argue, become angry, etc.