Natural Burials Are Growing in Popularity

Update Required To play the media you will need to either update your browser to a recent version or update your Flash plugin.
By Alice Bryant
01 July, 2017


Natural burials are increasing in popularity in the United States.

The Associated Press reports that a small, but growing number of Americans support calls for more environmentally-friendly "green burials."

They are turning to places like Rhinebeck Cemetery, about 130 kilometers north of New York City. The cemetery welcomes the natural burial movement's supporters and their loved ones.

The purpose of green burials is to speed up the breakdown of human remains through natural processes. They are far different from what many Americans experience when they die.

When a person dies, the remains are usually given to a funeral home, which washes the body and adds embalming fluid to help protect the appearance.

The funeral home places the body in a coffin, and transports it to a cemetery for burial. The coffin is often lowered into a solid burial vault in the ground. The vault protects the box and everything inside from the weight of the earth.

Rhinebeck Cemetery is different from most American cemeteries. Rhinebeck shuns the use of coffins, embalming fluid and burial vaults. It says they can slow the natural breakdown of the body in the ground.

The natural burial movement started more than 10 years ago. And its supporters say public attention is growing. Now, more cemeteries are changing their burial policies.

Gina Walker Fox says she loves the idea of "just being wrapped up and going back into the ground."

The 59-year-old bought a small piece of land at the cemetery near a tulip tree and wild berry plants. She imagines that, when she dies, her children will pick the berries when they visit her grave.

In the United States, natural burials took place in the days before the Civil War. But, during the war, embalming bodies became popular as a way to protect the remains of soldiers who died in battle.

Burial vaults became more common across the country after World War II. The vaults prevent coffins from sinking. And, they help keep the ground level so grass is easier to cut.

But green burial supporters say the environment is healthier without the vaults and embalming fluids. They also say there is no need for fossil fuels used in cremation. Natural gas, for example, is often used to fuel hot fires necessary to destroy the remains.

Of the thousands of cemeteries nationwide, only about 125 now offer green burials, notes Suzanne Kelly. She leads the Town of Rhinebeck Cemetery committee and wrote a book called "Greening Death." 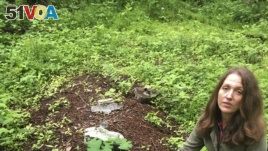 Suzanne Kelly leads the committee for the Town of Rhinebeck Cemetery in Rhinebeck, New York.

In Vermont, a law starting on July 1 will change how deep bodies can be buried. The current law requires a depth of at least 1.5 meters, but it will become one meter next month.

Green burial supporters say the one-meter depth will help decompose of the remains and be safe from animals.

Patrick Healy is president of the Vermont Cemetery Association. He wonders whether people understand how different green burials may be. He said, for example, that a body buried in cloth may have an unusual smell to it. He wonders about this and other possible issues.

Alabama last year changed a law that restricted coffin sales to funeral directors with a special permit. The change came after a court case from a woman who wanted to sell decomposable coffins for her environmentally-friendly burial ground.

Green burials can save people thousands of dollars in costs for a vault, coffin and grave marker. They have also helped grow a market for environmentally-safe products.

Mary Lauren Fraser makes decomposable urns and coffins at her home in western Massachusetts. She often shows her products at local farmers markets.

"I get all kinds of reactions," she said. "Way more people coming in and saying, ‘Is that a coffin? Did you make that? Is green burial legal?'"

State laws differ on the treatment of bodies. But green burial policies are legal across the nation, said Kate Kalanick. She is with the Green Burial Council in Ojai, California. It says untreated bodies are safe for public viewing before burial and do not pollute the soil.

For some people, the cost and the environment are not the main concern. What's more important to them is what feels right during a difficult time.

After their daughter died, Becky and Chris Mancuso hoped to bury her at Vale Cemetery in Schenectady, New York. Five generations of Becky's family are buried there. Chris couldn't imagine injecting chemical fluids in his daughter, and the cemetery's new natural burial area seemed to meet the beliefs of his Christian faith.

So, he built a wooden burial box for his daughter. Their other daughter, who is six years old, chose wood that was golden, like heaven, Chris Mancuso said.

He said his main purpose for making the burial box was to feel a connection with his dead daughter. He wanted to do anything he could for her.

"That was very hard for us," he said.

embalming – n. (gerund) the act of treating a dead body with chemicals to prevent it from decaying

vault – n. a room or chamber in which a dead person is buried

grave – n. a hole in the ground for burying a dead body

cremation – n. the act of burning the body of a person who dies

fossil fuel – n. a fuel, such as coal, oil, or natural gas, that is formed in the earth from dead plants or animals

urn – n. a container that is often shaped like a vase with a closed top and that is used to hold the ashes of someone who has been cremated

shun – v. to avoid on purpose; to ignore

decompose – v. to cause something, such as dead plants and the bodies of dead animals, to be slowly destroyed and broken down by natural processes or chemicals

viewing – n. an act of seeing, watching or looking at something