Update Required To play the media you will need to either update your browser to a recent version or update your Flash plugin.
By Susan Shand
28 January 2021


A Russian court on Thursday rejected opposition leader Alexei Navalny's appeal of his arrest. At the same time, Russian officials detained several of his allies and warned social media companies against posting in support of protests.

Last weekend, tens of thousands of protesters demonstrated in across Russia to demand Navalny's release. 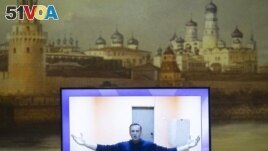 Russian opposition leader Alexei Navalny appears on a TV screen during a live session with the court during a hearing of his appeal in a court in Moscow, Russia, Thursday, Jan. 28, 2021, with an image of the Moscow Kremlin in the background.

The jailed leader appeared in court by video link. He said the government arrested and charged him in an effort to stop the opposition movement.

"You won't succeed in scaring tens of millions of people who have been robbed by that government," he said. "Yes, you have the power now to put me in handcuffs, but it's not going to last forever."

The 44-year-old is the most famous Russian critic of President Vladimir Putin's government. He was arrested on January 17 after returning from Germany. Navalny had been in that country for five months recovering from a poisoning that almost killed him.

Navalny is charged with violating a legal agreement connected to the suspension of his prison sentence.

He had been found guilty in 2014 of financial wrongdoing. He denied the crime and argued the charges were made for political reasons. He is also facing accusations in two other criminal investigations.

His defense lawyers told the appeals court that Navalny could not meet the probation requirement when he was under medical treatment in Germany. His lawyers also argued that Navalny's legal rights were violated repeatedly during his arrest.

Navalny described his jailing as a mockery of justice.

"It was demonstrative lawlessness" meant to scare him and all others, he told the Moscow court.

Navalny's supporters are organizing another round of protests for Sunday. Police on Wednesday searched the temporary home of Navalny and his wife, Yulia. Police also searched the homes of several of his supporters and made arrests.

Police detained his brother, Oleg Navalny, and Navalny's top ally, Lyubov Sobol. Anastasia Vasilyeva from the Navalny-backed Alliance of Doctors and Maria Alyokhina from the Pussy Riot music and performance group were also arrested. They were held for 48 hours.

A spokesman for President Vladimir Putin said the searches and detentions were part of police efforts to investigate public health law violations at the protests.

"Law enforcement agencies are doing their job," he said in a telephone call with reporters.

Police in Moscow issued a notice Thursday warning the public against attending demonstrations planned for Sunday. They said officers would take strong action to end the gatherings and arrest protesters.

Earlier this week, Russia's media and communications governing agency Roskomnadzor said it would fine Facebook, Instagram, Twitter, TikTok, YouTube and two Russian companies. The agency said the media sites failed to block calls for those under 18 to join Saturday's protests.

It accused him of pushing for children to attend protests. Volkov, who now lives outside of Russia, rejected the charges.

"The streets must speak now. There is nothing else left," Volkov wrote on Twitter after Navalny's appeal was rejected.

scare – v. to cause (someone) to become afraid

handcuffs – n. two metal rings joined together and put around a person's wrists to hold him

due process – n. the official and proper way of doing things in a legal case : the rule that a legal case must be done in a way that protects the rights of all the people involved

mockery – n. behavior or speech that makes fun of someone or something in a hurtful way