Update Required To play the media you will need to either update your browser to a recent version or update your Flash plugin.
By Susan Shand
11 May 2021


American television network NBC said Monday that it will not broadcast the Golden Globes award show in 2022. The move may lead to the end of one of Hollywood's oldest and most-watched awards shows.

The NBC announcement may have been caused by growing criticism of the Hollywood Foreign Press Association (HFPA), the organization awarding the Golden Globes.

Film production companies, movie stars and other parts of the movie industry have criticized the organization for its lack of diversity. They also accused the Golden Globes of creating a corrupt environment. 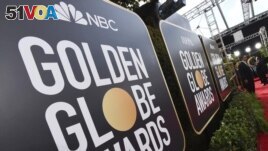 Also on Monday, Variety and Deadline Hollywood reported that actor Tom Cruise returned his three Golden Globes to the organization. He won those awards for his performances in Jerry Maguire, Magnolia and Born on the Fourth of July.

In a statement, NBC said it believes the Hollywood Foreign Press Association is committed to change, but the changes needed cannot come quickly enough for next year's show.

"However, change of this magnitude takes time and work, and we feel strongly that the HFPA needs time to do it right," the network said. "We are hopeful we will be in a position to air the show in January 2023," it added.

The organization has been criticized following an investigative report in February by The Los Angeles Times. The story questioned the organization's record on diversity. HFPA has about 90 members and none are Black.

It has promised to change and last week approved a plan to diversify its membership, but several big Hollywood studios, including Netflix, Amazon and Warner Brothers have threatened to end their relationships with the organization.

Stating that he did not "believe" HFPA's new plan would be effective, Netflix chief Ted Sarandos criticized "the lack of clear standards for how your members should operate."

In a letter sent Sunday and shared with reporters Monday, WarnerMedia said it would cease its relationship with HFPA until it made changes.

"For far too long, demands for perks, special favors and unprofessional requests have been made to our teams and to others across the industry," WarnerMedia executives said in a letter.

Criticism of the Hollywood Foreign Press Association is not new, but has increased over the last six weeks.

Members of the HFPA are mostly little-known journalists who make money from the yearly Golden Globes show.

After the NBC announcement, the HFPA said its plan for changes would lead to new members, new leadership and several policy changes.

Last week, the organization approved plans to add at least 20 new members this year, with a focus on Black members. It also plans to increase its total membership by 50 percent in the next 18 months.

Tina Tchen is the president of Time's Up. She called the HFPA's plan nothing but false "platitudes." "These measures ensure that the current membership of the HFPA will remain in the majority," she said.

Time's Up was created in 2019 following the Weinstein case to support victims of sexual harassment in the movie industry.

magnitude – n. the size, extent, or importance of something

standard – n.a level of quality, achievement, etc., that is considered acceptable or desirable

perk – n. something extra that someone receives in addition to regular pay for doing a job

favor – v. a kind or helpful act that you do for someone

journalist – n. the activity or job of collecting, writing, and editing news stories for newspapers, magazines, television, or radio

harassment – n. to annoy or bother (someone) in a constant or repeated way

overdue - adj. not appearing or presented by a stated, expected, or required time

platitude – n. a statement that expresses an idea that is not new