Update Required To play the media you will need to either update your browser to a recent version or update your Flash plugin.
By Bryan Lynn
22 June, 2019


Scientists in the United States have predicted a near-record area of oxygen-starved water to appear in the Gulf of Mexico this summer.

The National Oceanic and Atmospheric Administration, or NOAA, describes the area as a "dead zone" containing little to no oxygen. Such an area can be deadly to fish and other sea life.

NOAA scientists reported the 2019 dead zone area could spread to more than 20,000 square kilometers. The Gulf of Mexico sits along the southern coast of the United States. The dead zone covers an area off the coasts of Louisiana and Texas. 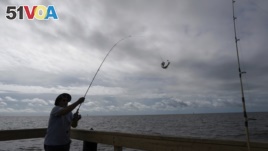 Tim Hitchens, of Gulfprort, Miss., pulls in a fish from a pier in the Gulf of Mexico, the morning after Tropical Storm Gordon made landfall nearby, in Biloxi, Miss., Wednesday, Sept. 5, 2018. (AP Photo/Gerald Herbert)

Dead zones are formed in other areas of the U.S. and the world. But the one that forms in the Gulf of Mexico is the second largest on Earth, NOAA says. The largest exists in the Baltic Sea.

Many things can play a part in forming dead zones, also called hypoxic zones. Physical, chemical and biological causes can be involved. However, NOAA reports that the biggest cause is nutrient pollution from human activities.

Nutrients, including chemical fertilizers from farms, can pollute water that runs off land into rivers and coastal areas that feed into the Gulf of Mexico. The nutrients can cause an explosion in the population of algae, which then dies, sinks and breaks down in the water. This process takes large amounts of oxygen, greatly reducing the supply available to healthy sea life.

Nancy Rabalais is an ocean ecologist with Louisiana State University. She told National Geographic magazine that a lot of the sea creatures begin to leave when the oxygen supply drops too low.

"When the oxygen is below two parts per million, any shrimp, crabs, and fish that can swim away, will swim away," Rabalais said. Sea life that has settled on the bottom and cannot swim away will be nearly completely destroyed, she added.

This could worsen the problems with nutrient runoff, especially from agriculture-related chemicals. "The best way to solve the issue is to limit the nutrients at their source," says Rabalais. "Once they're in the river, there's no good way to reduce them."

Don Scavia is a former ecologist who studied ocean conservation issues at the University of Michigan. He agrees that dead zones are likely to keep growing if steps are not taken to reduce the nutrient flow. "We will never reach the dead zone reduction target [of 4,920 square kilometers] until more serious actions are taken to reduce the loss of Midwest fertilizers into the Mississippi River system," Scavia said in a statement.

Bryan Lynn wrote this story for VOA Learning English, based on reports from the Associated Press, Reuters and NOAA. Mario Ritter Jr. was the editor.