Needy Kids In Virginia Get Supplied for School

Update Required To play the media you will need to either update your browser to a recent version or update your Flash plugin.
By Christopher Cruise and Caty Weaver
05 September, 2013

On the show today, we play new music from two singer-songwriters.

We also tell about a campaign to collect school supplies for needy children.

But first, we knock out a report about a program for young boxers.

Almost 20 percent of Washingtonians are extremely poor. They live in neighborhoods where crime and violence are usual. Many organizations have community programs to try to improve conditions. Christopher Cruise tells about one of them.

Washington, DC can be a dangerous town.

And it does not get any easier here, at Lime Lite Boxing and Fitness.

Tony Simmons is the founder of the training center for young fighters. The group provides young boxers with everything they need for the sport.

He says the trainers also provide fatherly spirit and guidance for some of the children.

"Some kids don't have fathers at home or uncles...so we take kind of take on the role of an added parent. Like they say: it takes a village."

The coach has some rules for those who want to be part of the boxing program. The children must have average or better than average scores in school. They also are not permitted to fight outside of boxing centers. 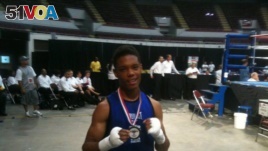 A Lime Lite gym boxer
Mr. Simmons says the training can make the children better boxers. But he says it also provides them hope for the future. He says the coaches all have jobs. The children want to be like the coaches. So, the coaches help them learn about the value of work.

"These kids are going to go out and get jobs and be law-abiding citizens."

Coach Simmons says a few hours in the center every day keeps the kids off the streets and out of trouble. He says by the time they are done training they are so tired they just want to go home, do their school work and go to sleep.

"I get a lot of respect from the kids, because they look up to me. They respect what I do. I've been putting in the work for ten years and they see that."

Mr. Jackson started training at Lime Lite when he was nine. He was small and other kids were mean to him. He would get into fights at school. Then, school administrators would punish him.

So he started attending the gym. He says he wanted to learn how to keep calm. But he also learned he was naturally good at the sport of boxing.

Now, Malik is a high school graduate who also earned a place on the United States national boxing team. He hopes to go to the Olympic Games in 2016.

"When you take a kid from scratch, who has two left feet and you see him be the best, the elite among the elite, like Malik Jackson. I really can't put it into words, but it is a beautiful feeling."

The two men will continue to work together. Mr. Simmons was recently chosen to be a coach of the United States national boxing team.

School Supplies for All

Most American children went back to school this week after a long summer break. For weeks, stores have been advertising "back to school" sales, offering everything from clothing and backpacks to pens and notebooks.

Some needy families are not able to buy everything on the long list of required school supplies. But one of the wealthiest areas in America, Fairfax County, Virginia, has a campaign to make sure all local children get what they need.

At a middle school in Reston, Virginia, tens of volunteers are helping in the "Collect for Kids" campaign.

"Organizing and stocking boxes, putting all the supplies each school needs on one table. Then the schools come and get their supplies."

That is Natalie Toma, a 17-year-old volunteer. She says she learned about local poverty through her work with Collect for Kids.

"Personally, I didn't realize how many people are actually in need for supplies that can't afford it."

Susan Ungerer first learned about the problem of poverty many years ago. So the former teacher decided to start collecting and giving out free school supplies. She launched her own non-profit group, Kids R First, in 1998.

"We reached a limit with our organization at this point with a certain number of board members, certain amount of money we were able to raise."

That was when she got the idea to join with other groups to launch one big campaign that could help more students. Jay Garant is with the Fairfax County Public School System. He says county officials help to organize the effort.

"We have about 11 not-for-profits and may five or six for profit companies involved. The goal here is to be more efficient and pay more attention to who is covering what. It's all about communication."

Jennifer Rose operates a non-profit group called Our Daily Bread. She says it asks people to donate money instead of school supplies.

"Quite frankly, donors today are very busy. They don't have time to go shopping. So we're able to stretch the donation dollars better than they could taking advantage of sales."

This year, Collect for Kids helped 19,500 students at 90 schools. Susan Ungerer says the campaign can be complex. But she says each school receives exactly what its students need.

"In the spring every year, we send out an order form to each school that's part of our program and they send in a custom order. So it's all grade appropriate."

Aimee Monticchio is head of the Langston Hughes Middle School.

"Between 7th and 8th grades, we give out over 200 hundred backpacks a year."

Terraset Elementary School principal Lindsay Trout says 40 percent of her students use these supplies. She says the effect is educational and psychological.

"It makes a huge difference in what children and how children are able to learn, when they come in and have what they need in a good condition."

Parents like Ivonee Cedeno are pleased to know they can come to school and get backpacks full of supplies their children need for class.

"As a parent I think it's amazing. It's very helpful to a lot of children."

Musicians Neko Case and Chelsea Wolfe play very different music. But in their new albums their songs share common ideas. Milagors Ardin tells about each and plays some of the new music. 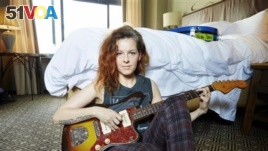 Singer-songwriter Neko Case
Neko Case appeared on the show "Late Night with Jimmy Fallon" this week and performed "Man." The song is the only single released from the album.

Like Neko Case, Chelsea Wolfe grew up on the west coast. The Californian released her fourth album, "Pain is Beauty," Wednesday.

Wolfe told the online magazine The Fader that "Pain is Beauty" is partly about, in her words, tormented love. She said children are often taught that love is easy and beautiful. But she said there are hardships and confusion in love relationships that people forget.

In "We Hit A Wall" Chelsea Wolfe sings we hit a wall when we were young / we didn't know how to control...I showed you how to hold my hand...I'll show you how to love.

Neko Case has said that her new album is born of a long painful period in her life. She said she became severely depressed after the deaths of some family members, including her grandmother.

The song "Night Still Comes" suggests the seeming endlessness of a deep sadness.

I'm June Simms. Our program was written by Christopher Cruise and Caty Weaver, who was also the producer. Join us again next week for music and more on American Mosaic from VOA Learning English.
Related Articles
go top