Update Required To play the media you will need to either update your browser to a recent version or update your Flash plugin.
By Susan Shand
17 December, 2018


Almost 200 nations have agreed on a set of rules which they hope will breathe life into the 2015 Paris Agreement on climate change.

The agreement sets out how countries should report their emissions – pollutants released into the environment -- and efforts to reduce them.

But negotiators delayed other important decisions until next year. The delay has angered environmentalists and countries that wanted stronger actions.

Scientists are warning that the world must move away from coal, oil and other fossil fuels over the next 20 to 30 years.

Mohamed Adow is a climate policy expert at Christian Aid, a British aid group. He said, "The majority of the rulebook for the Paris agreement has been created, which is something to be thankful for."

Adow said the lack of support for the recent climate conference shows that some countries are in denial about reality of climate change. 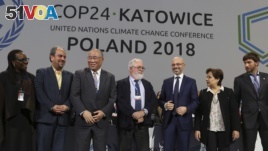 Heads of the delegations react at the end of the final session of the COP24 summit on climate change in Katowice, Poland, Dec. 15, 2018.

The talks ended late Saturday in the Polish city of Katowice. Officials agreed on common rules on how nations can cut emissions. Poor countries received promises of financial support to help them reduce emissions, overcome changes such as rising sea levels and pay for damage that has already happened.

"Through this (agreement), you have made a thousand little steps forward together," said Michal Kurtyka, a Polish official who led the negotiations.

He said while each country would likely find some parts of the agreement it did not like, efforts were made to balance the interests of all groups.

Scientists are increasingly worried that earth's warming is continuing at a faster rate than governments are working to overcome its effects.

Last month, a study found that climate change will worsen disasters such as the deadly wildfires in the American state of California.

The study was the work of the Intergovernmental Panel on Climate Change, or IPCC. The group reported that it is possible to limit the earth's warming to 1.5 degrees Celsius by the end of the century. But to do so would require big changes in the world's economy, including a move away from fossil fuels.

Worried about efforts to include that idea in the final report of the meeting, the United States, Russia, Saudi Arabia and Kuwait stopped efforts to endorse the IPCC report during the meeting. The move angered some island nations and environmental groups.

The final report failed to list internationally recognized targets for reducing carbon dioxide and other industrial emissions by the year 2030.

Alden Meyer is a policy expert with the Union of Concerned Scientists. He said the talks created support for the Paris agreement and could bring the U.S. government back into the deal by a future presidential administration.

Elliot Diringer is with the Center for Climate and Energy Solutions, a research center based in Washington. He said, "Overall, the U.S. role here has been somewhat schizophrenic— pushing coal...but also working hard in the room for strong transparency rules."

The United States is still in the Paris agreement until 2020, which is why American officials attended the talks in Poland.

The Associated Press reported this story. Susan Shand adapted it for Learning English. The editor was George Grow.

emission– n. the act of producing or sending out something (such as energy or gas)

role– n.a part, place or purpose of something

transparent– adj.able to be seen, open