Update Required To play the media you will need to either update your browser to a recent version or update your Flash plugin.
By VOA
25 April, 2015
NEW DELHI— A major earthquake and dozens of powerful aftershocks struck Nepal on Saturday, destroying parts of Katmandu, the capital city. The quake killed more than 1,300 people.

The 7.8-magnitude quake shook Mt. Everest, the highest mountain on Earth. It was the most powerful to hit the area in 81 years. The resulting avalanches buried mountain climbers in their base camps.

At least 34 people were also killed in India. Five deaths were reported from Tibet. Bangladesh, Bhutan and the Nepal-China border reported casualties.

The United States pledged at least $1 million in disaster relief. The U.S. and other nations are also sending disaster response team to help. Volunteers help with rescue work at the site of a building that collapsed after an earthquake in Kathmandu, Nepal, Saturday, April 25, 2015.

The earthquake hit just before noon, local time. It was relatively close to the surface, centered at a spot 80 kilometers northwest of Kathmandu. Historic structures, including the iconic 19th century tower, the Dharara tower collapsed. Buildings and walls around the capital turned into a pile of rubble. Nepalese media reported that many people were trapped there. The country's only international airport was shut down.

An hour after the initial quake, a 6.6 magnitude aftershock hit the area. 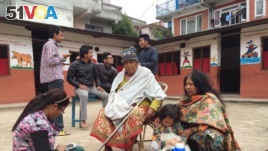 People take refuge at a school after a 7.9-magnitude earthquake struck, causing some buildings to collapse, in Kathmandu, Nepal, April 25, 2015.

Director of Nepal's Tourism Board, Aditya Baral, described to VOA the scene in the hours after the earthquake. "People are quite scared, everybody is out now, phone lines are not operating, everybody is outside because there are recurrent aftershocks going on," he said.

An avalanche on Mt. Everest caused by the deadly earthquake has buried a part of the base camp for climbers, killing 10, according to Nepal's tourism ministry. 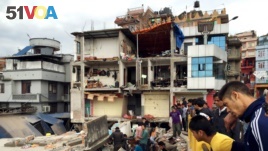 People survey a site damaged by an earthquake, in Kathmandu, Nepal, April 25, 2015.

Television images showed many injured people crowded outside hospitals in Kathmandu trying to get help. The number of casualties is likely to rise.

Baral said officials feared that the old area of Kathmandu could have suffered the worst damage. "Old houses in the narrow lanes of the main city core area might have been devastated, there are not proper building structures, designs, they are almost hundred years old, there are small bylanes in between," he said.

The earthquake was also felt in neighboring countries, including India and Bangladesh.

Indian Prime Minister Narendra Modi tweeted, "We are in the process of finding more information and are working to reach out to those affected, both at home and in Nepal."

He spoke to the Nepalese president to offer help. The Indian air force has been put on standby.

He says officials are still trying to assess the situation, and there are reports of three people being killed in the state of Bihar. The eastern Indian state adjoins Nepal.