Netanyahu Says Muslim Was Behind Holocaust

Update Required To play the media you will need to either update your browser to a recent version or update your Flash plugin.
By VOA
22 October, 2015


Benjamin Netanyahu tried Thursday to recover from saying a religious Muslim was behind the Holocaust in World War II.

"Hitler did not want to exterminate the Jews at the time," Mr. Netanyahu said. "He wanted to expel the Jews (from Germany). And Haj Amin al-Husseini went to Hitler and said, ‘If you expel them, they will all come here.' ‘So what should I do with them?' he asked. He said, ‘Burn them.'"

About 6 million Jews are reported to have died during the war. Nazi Germany's genocide program is now called the Holocaust. 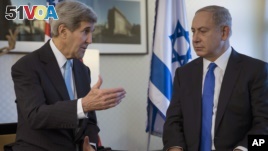 On Thursday, Mr. Netanyahu and United States Secretary of State John Kerry met in the German capital, Berlin. Secretary Kerry called for an end to the deadly violence between Israelis and Palestinians. At least eight Israelis and about 50 Palestinians have been killed since the violence worsened a month ago.

After his meeting with the Israeli leader, Secretary Kerry spoke to reporters.

"It is absolutely critical to end all incitement and all violence and find a road forward to build the possibility that is not there today for a larger process."

Mr. Kerry is to meet with Palestinian President Mahmoud Abbas on Friday.

Mr. Netanyahu did not heed Mr. Kerry's advice when he spoke to reporters.

He said, "Incitement from Hamas, incitement from the Islamist movement in Israel, and incitement, I am sorry to say, from President Abbas and the Palestinian Authority."

United Nations Secretary-General Ban Ki-moon also has met with Israel and Palestinian leaders. On Wednesday, Mr. Ban said he was, in his words, "not optimistic," after the talks. He urged both sides to work to end the violence before it becomes another Palestinian uprising.

Mr. Ban met with President Abbas in the West Bank town of Ramallah. After the meeting, he said: "We will continue to support all efforts to create the conditions to make meaningful negotiations possible. Our most urgent challenge is to stop the current wave of violence and avoid any further loss of life."

On Wednesday, Mr. Abbas told reporters during a joint press conference with Mr. Ban that Israel is to blame for the increase in violence.

Secretary Kerry will travel to Vienna, Jordan and Saudi Arabia. He plans to meet with Russian, Turkish and Saudi leaders to talk about the conflict in Syria and security in the Middle East

uprising – n. a usually violent effort by many people to change the government or leader of a country

exterminate – v. to destroy or kill (a group of people or animals) completely

optimistic – adj. hopeful and sure of the future